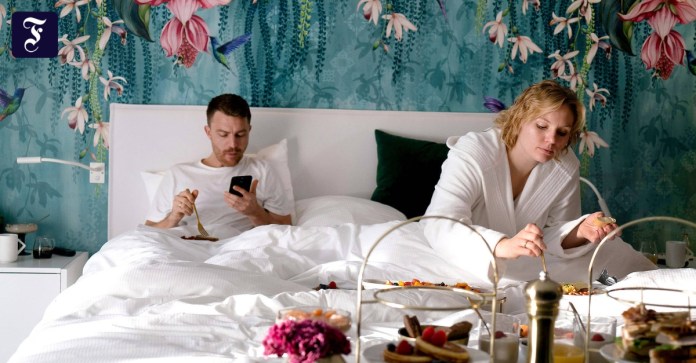 When you see Maren (Rosalie Thomass) and Dennis (Friedrich Mücke) enjoying their lavish room service breakfast in front of the floral wallpaper of the hotel suite in the new film by director Emily Atef, “Jackpot”, you might think that you have had it with the modern version of Bonnie and Clyde to do. The two are not bank robbers and murderers, but at least they are on the run with a stolen sports bag full of money. If her husband Dennis hadn’t been confined to a wheelchair due to an accident at work and the insurance would cover his high treatment costs, Maren might not have taken the sports bag from the passenger seat of the wrongly parked car that the public order office ordered her to tow away.

Inside the bag you will find more than 600,000 euros. It quickly becomes clear to her: That can only be black money – and “if you steal black money, it is not stolen”. This is roughly the logic of the crook of this inconspicuous blonde, of whom one does not suspect that she has ever been in prison for armed robbery. Also, at first glance, one does not trust that she works for a towing company and that she heaves her husband over several floors into the shared apartment.

Dennis is skeptical, but before there is an opportunity to discuss the Chose things roll over. The couple have to flee because the gangster with the beautiful name Henning Karoske (Thomas Loibl) wants his money back in order to start a new life abroad with his wife and daughter abroad. Because he is a murderer, but also a good father, he covers his little daughter and strokes her hair before he sets off to get the money back. He’s steadfastly heading for the showdown.

The almost ninety minutes of this gangster drama, filmed based on a script by Frédéric Hambalek, pass in tense breathlessness. The fact that overly fast editing sequences were avoided in post-production gives the film a solemn tone and a sadness that is worth seeing. Because the gloomy shots can often remain in place for a few seconds, many scenes have an effect. This is particularly noticeable when Bernhard Keller’s camera points at the unscrupulous killer’s facial muscles, which are tense with hate. Only because of the sometimes out of place sound background, the pictures lose some of their power.

With “Jackpot”, the first has a film in its program that is not only entertaining, but also refreshingly bold, without overstraining its topic: Rosalie Thomass is the strongest half of the couple: Maren is not a woman who appears weak and dependent, even saved would have to be. She appears as a courageous partner who acts out of love. She is not stylized as a gangster bride. Emily Atef draws a picture that is more realistic than you might think at the beginning. Only now and then do the dialogues seem stilted, for example when Maren looks at her husband in the hotel bed with wide eyes and breathes: “There is something you don’t know about me.”

Will the Nord Stream 2 gas pipeline continue to be built...

“The Promise” by Sinfoglesia: the composer believed he was going to...