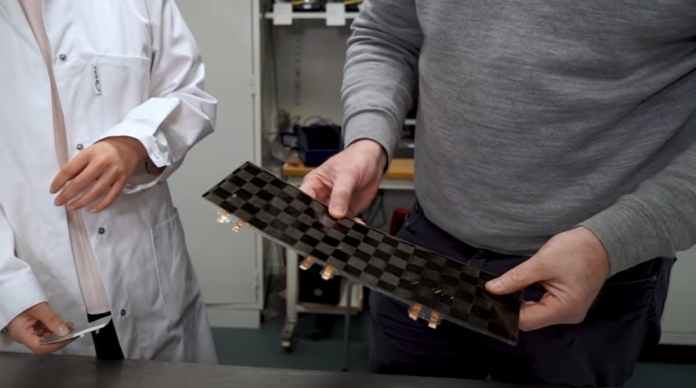 First of all: the massless structural battery developed by the Swedish scientists should not be confused with the approach pursued by Tesla, among others, of using batteries in a sandwich construction as structural components, for example as a floor assembly.

The structural battery, which is jointly developed by Chalmers University of Technology and the KTH Royal Institute of Technology, has nothing to do with ordinary battery technology. The massless energy storage of the Swedes look like ordinary components for the respective purpose, which have been expanded to include the possibility of storing energy.

Research has been carried out on the structural battery for years. Successes were communicated rather sparsely. The project is supported by the European Commission’s Clean Sky II research program and by the US Air Force.

While it was possible in the past to develop cells that had either good mechanical or good electrical properties, project leader Leif Asp, professor at Chalmers University, can now announce a breakthrough.

With the current generation of the structural battery, it was “possible to use carbon fibers to design a structural battery that has both competitive energy storage capacity and rigidity,” said Asp Gigapascal offer. This means that the energy density is still well below that of conventional lithium batteries.

Project starts in next phase

Although this is already working quite well, the research project will move on to the next phase. This consists of using carbon fibers in the positive electrode as well and doing without the aluminum foil.

Project manager Asp estimates that in this way an energy density of 75 watt hours per kilogram and a rigidity of 75 gigapascals should be achieved. This would make the structural battery about as strong as aluminum, but much lighter. And the energy density then slowly reaches values ​​at which it starts in a conventional lithium battery.

As a first step, Asp sees great potential for smartphones, laptops and electric bicycles, which can be made much lighter and more compact thanks to the structural battery. The Swedish researchers are also looking at use in electric cars, for example.

The new technology should be available in around two years for use in comparatively small devices.

In the footsteps of the great father: “M. Schumacher” returns convincingly

Peter the Great: Charm, slapstick and an ideal world

ManCity and Real rise sovereignly in the Champions League