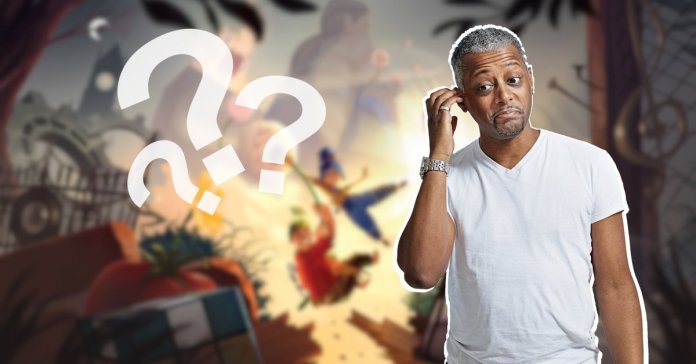 A chaotic and colorful co-op game fights its way to the top of the top games of the year on Metacritic. (Image: Mike Harrington / Getty Images)

A brightly colored co-op adventure that hardly anyone has on their radar is currently fighting its way to the top on Metacritic. We’ll tell you which game it is and why you should definitely try it out.

It Takes Two – The Messiest Couples Therapy Ever

Our test for It Takes Two will be released on Sunday by GIGA GAMES. But we can already tell you: This game is worth it! You play as two parents, May and Cody, who are about to divorce. Your daughter Rosie wants to prevent that – and without further ado she makes two dolls.

Thanks to a spell by couples therapist Dr. Hakim you transform into these dolls. From now on you have to fight across your property. You should also fix your relationship on the side. But see for yourself:

The highlight of the game: All of the 37 levels are different from each other. Behind every door there are new mechanics, items or weapons with which you have to prove yourself against flora and fauna.

In the review portal Metacritic, the PS5 version achieved outstanding results 90 out of 100 points and secures itself up to date First place on the list of the best games in 2021. The version for the Xbox SX does not have to hide with 90 points and lands in second place.

It takes two comes from Hazelight Studios, the makers of the co-op hit A Way Out. The creator of the two games is so convinced of his new work that he will promise you $ 1,000 if you don’t like the game.

The critics like It Takes Two – but what about you guys? As of today, the game is available for PS4, PS5, Xbox One, Xbox SX and PC. So grab it quickly and be the first to take part! You can also share your opinion on EA’s new co-op hit on Facebook!

Energy tax 2.0: With this idea, the combustion engine will be...

Polls show deep rifts: Biden is not quite as hated as...

Before the top game in Frankfurt – Bayern Munich in the...