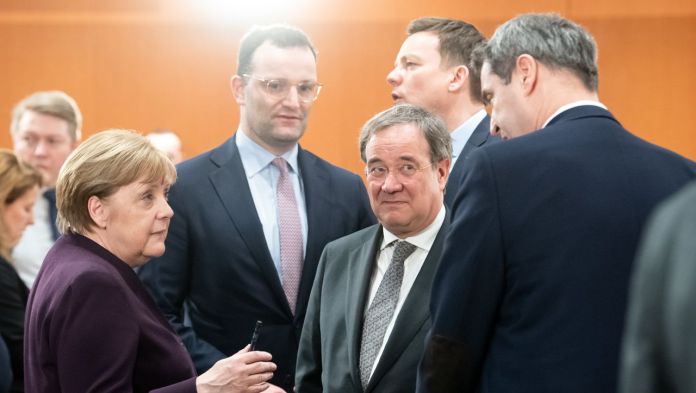 According to a survey, the Union has again clearly lost approval. In the “Sunday trend”, which the Kantar polling institute collects weekly for “Bild am Sonntag”, the CDU and CSU only reach 27 percent – that is four percentage points less than a week earlier.
In mid-January, the Union was still 36 percent in the “Sunday trend”. After that, allegations of corruption were raised against MPs. They had earned money by procuring protective masks or had attracted attention abroad through their work for dubious regimes and politicians. In the state elections in Rhineland-Palatinate and Baden-Württemberg, the CDU then achieved disastrous results on March 14th.

“The bottom has not yet been reached”

The winners of the survey are the Greens, who have increased by 3 percentage points to 22 percent compared to the previous week. The SPD increases by one percentage point to 17 percent. The FDP comes to 10 percent (plus 2), as does the AfD (minus 1). The left stays at 8 percent. With these results, a traffic light coalition of the Greens, SPD and FDP would be theoretically possible.

According to Torsten Schneider-Haase from Kantar, the downward trend for the Union could continue. “The bottom has not yet been reached,” Schneider-Haase told the “Bild am Sonntag”. “Things can go further downhill for the Union if more affairs come to light or the negative corona trend is not stopped.”
The opinion research institute Kantar interviewed people by telephone for the newspaper in 1942 between March 11th and 17th.

Racism in football – he wrote “Gracias, negrito” – then came...

This is what the new version of “Daylight In Your Eyes”...

Some variations for Donald Trump’s final days in office