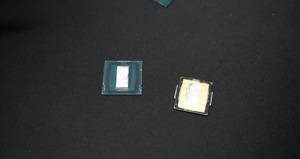 Today’s start of the Rocket Lake S processors is not only exceptional in the form of an early start for the Core i7-11700K, but also with regard to the data collected, together with the Core i5-11600K and Core i9-11900K, we can speak of a bumpy start will. Of course, der8auer did not miss it and offers us additional insights with a decapitated Core i9-11900K.

First of all, he decapitated a Core i9-11900K, i.e. removed the heat spreader. This doesn’t seem to be that easy. On the one hand because there are some SMD components on the circuit board and next to the heat spreader that must not be damaged and on the other hand because of the larger area of ​​the chip, which increases the shear forces and makes detaching the indium more difficult.

For Rocket Lake-S, Intel only produces one chip variant with eight Cypress Cove cores and the integrated graphics unit. There is no longer a distinction between processors with six or fewer cores in the form of a second chip. Due to the larger cores, the new chip grows from 206 to around 270 mm² – it is a quarter to a third larger.

If the heat spreader is loosened, the underside is completely gold-plated. This is done to create an adhesion layer for the indium. So far, Intel only gilded the area that was also covered by the chip.

The information about the thickness of the chip or the heat spreader was also interesting. With Comet Lake-S, Intel reduced the thickness of the chip from 0.8 to 0.5 mm. Accordingly, the heat spreader has become thicker by this amount. With Rocket Lake-S, Intel has returned to a size (2.36 mm) in the heatspreader that we last saw with the Core i9-9900K. The chip itself comes back to 0.6 mm, so it has become a bit thicker again compared to Comet Lake-S. In the run-up to the launch, Intel did not want to give us a final answer to the question of whether the Thin Die STIM is used as it is with Comet Lake-S. Apparently the chip has gotten a bit thicker again.

Finally, Roman also looked at whether the temperatures would improve if liquid metal was used instead of soldering with indium. He is a bit surprised by the measured 12 ° C difference – the processor or the chip becomes significantly cooler. He is surprised by this result and will certainly deliver further results here that confirm this.

At this point we would like to show you a YouTube video. Protecting your data is important to us: YouTube sets cookies on your computer by embedding and playing them, with which you may be tracked. If you want to allow this, just click the play button. The video will then be loaded and then played.

How seasonal effects work on the virus

“That’s it with the last master’s dreams!”

U5 extension: the new line in the heart of Berlin

THW Kiel after a dramatic game in the final of the...