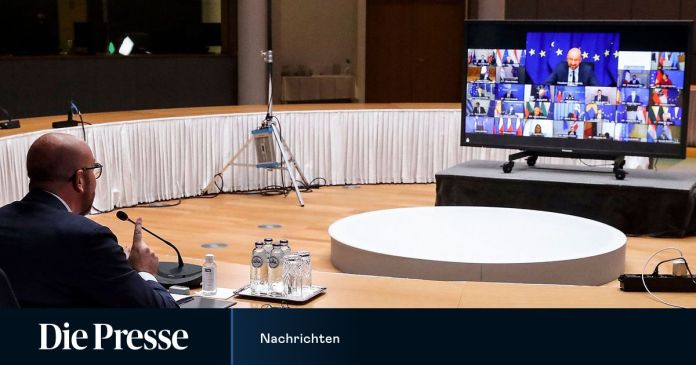 Chancellor Kurz once again calls for a correction in the distribution of the vaccine. The EU ambassadors should clarify whether a compromise can be found with the additional doses from Biontech / Pfizer.

The heads of state and government have apparently come closer to a solution for the distribution of vaccination doses at their virtual summit. The details should be clarified by the EU ambassadors. A solution is to be found on the basis of the population share of the EU states and the delivery speed in the distribution of ten million additional doses of Biontech / Pfizer, it said on Thursday in council circles.

At the beginning of Thursday, Chancellor Sebastian Kurz (ÖVP) again called for a correction in the distribution of the vaccine. He was supported by several Eastern European colleagues. According to reports, the Portuguese EU Council Presidency also wanted to use part of an additional ten million Biontech / Pfizer cans for compensation.

Several heads of government on Kurz’s side

In addition to Kurz, Croatia’s Prime Minister Andrej Plenkovic and the heads of government of the Czech Republic, Slovenia, Bulgaria and Latvia also complained that the actual distribution deviates from the originally agreed population key. Germany, on the other hand, has argued that the imbalances arose because individual countries did not order all the cans on offer and they were bought up by others. Denmark, Sweden and the Netherlands had also opposed a correction mechanism. EU Commission President Ursula von der Leyen then suggested using ten million doses of the vaccine from Biontech / Pfizer, which will now be delivered early in the second quarter, for compensation.

Thus, the EU ambassadors should solve the conflict and not the steering committee, whose co-chair Clemens Martin Auer had to withdraw because of the cause. The EU ambassadors are bound by instructions to their capitals and should decide unanimously.

“If vaccine distribution is not to be an issue for a summit, what then?” Declared the Chancellor. In view of ongoing delivery problems with corona vaccines, the EU summit wants to speak out in favor of the control of exports to third countries, according to a draft of the summit conclusions.

It is completely incomprehensible that the EU exports 70 million doses of corona vaccines to all parts of the world, but does not itself receive any vaccines from outside the EU, said Kurz. “That is a massive disparity,” said Kurz. “If Commission President Ursula von der Leyen is of the opinion that export restrictions make sense, then they should be fully supported,” stressed the Chancellor.

In short: “Cost what it may”

When fighting the pandemic, the motto must apply, “no matter what the cost,” said Kurz. The discussion that there is a financial restriction of 200 million euros for the procurement of vaccines in Austria is therefore “absurd”. So far, 80 million euros have been spent and 30 million cans ordered, the problem lies in the delay in deliveries, said the Chancellor.

In any case, Austria has got things rolling on the issue of vaccine distribution, Kurz said. The heads of state and government had agreed that the vaccines would be delivered proportionally based on the population distribution, but this was changed by a decision by the health officials, so that Malta would now receive three times as many vaccines as Bulgaria in the first half of the year. But he believes that there is now more understanding for a balance within the EU. “I even go so far, if there is no solution here, that it could cause damage to the EU in a way that we have not seen for a long time,” explained Kurz.

Franziska Preuss and Roman Rees without a chance

LG OLED, QNED and NanoCell 2021 will receive Google Stadia and...

Eight dead in demonstrations in Myanmar

The extended mask requirement in Lippe | applies here from Saturday...

The Bergdoktor: Will Martin Anne finally say that he is going...