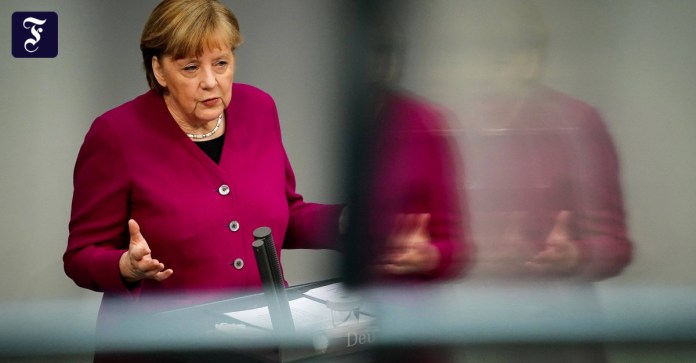 Et is the first day after the Chancellor’s unusual admission that she made a mistake when she and the Prime Minister decided on a five-day Easter break. But on Thursday in the Bundestag Angela Merkel no longer mentions the matter. In her government statement, she wants to clarify a few things.

Germany is in the third wave of a never-ending pandemic. In the face of a situation in which nothing seems to help any more and nothing is getting better, many people rightly asked themselves: “Was it all for nothing? Will it go on and on? ”Merkel immediately gave the answer: no. The situation today is very different from a year ago. Success has been achieved. But the British mutant of the corona virus was not predictable and brought a major setback. And this mutation is unfortunately “a fairly large amount more deadly” than the original virus.

Then follows a commitment to federalism: Merkel reminds of the Saarland and Schleswig-Holstein, where the epidemic situation is far better than in the rest of the republic – and where the lockdown is to be ended soon. It is reminiscent of a number of counties where the seven-day incidence is below 100, below 50, even below 35. “It would be fatal to put a yardstick on everyone,” says Merkel, who was previously known as an advocate of national rules.

The Chancellor uses this commitment to a federal and regionally differentiated approach at the same time for a relief attack. The federal government cannot do everything and therefore cannot be held responsible for everything. Creativity on the lower levels is required. “No Lord Mayor is prevented from doing what is being done in Tübingen or Rostock,” she refers to model cities, where more openings for shops, restaurants, cultural institutions and events are made possible with a consistent test regime. All federal states had also informed her that enough tests had been ordered for the schools for March and April. But the fact that tests are actually carried out there is no longer the responsibility of the federal government. “The federal government cannot provide the test infrastructure for 40,000 schools”. Germany has a federal system for this.

Merkel’s message is: I can’t decide everything, I can’t do everything. And: If you want something different from me, then you have to do it too. To do nothing, Merkel once again made it clear that in view of the once again exponentially increasing number of infections, this is not an alternative. Now people who are more than 80 years old would no longer end up in the intensive care units, but those who are 50, 60 or 70 years old. “The aim must be that thousands more don’t die.”

Merkel then indirectly goes into the “mistake” of the Easter rest. The pandemic showed “serious weaknesses” in the political system. “We have to improve as a federal system,” she says. However, she does not say what that means in concrete terms. She only mentions the weaknesses, for example in digitization, that have come to light at the federal level.

Highest number of November deaths in Sweden since 1918

The last race of the year in chronology Vienna Airport is hoping for an upswing in summer