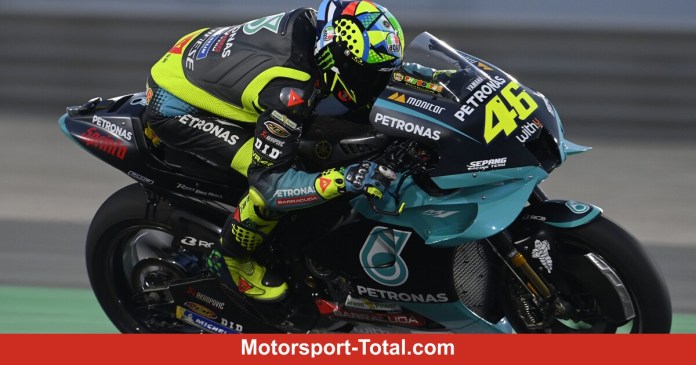 Rookie Raul Fernandez rides a Kalex for the Ajo-KTM team. He increased step by step and moved up to sixth place. His team-mate Remy Gardner follows directly behind in seventh place.

Marcel Schrötter is in the pits and holds eleventh place.

Not much has changed in the classification. Sam Lowes leads the ranking ahead of Marco Bezzecchi, Bo Bendsneyder, Jake Dixon and Jorge Navarro.

Last year, Joe Roberts was able to compete in the top field for the first time in his career in Qatar. In winter, the American moved to Italtrans and took over from world champion Enea Bastianini. Roberts is currently twelfth.

With Cameron Beaubier there is another American. The five-time AMA champion has taken over from Roberts at American Racing. Beaubier is currently at number 28.

In his sixth lap, the German improved to 10th place. Then he finished his first run and turned into the pit lane.

Moto2 FT1: Lowes in the lead

Marcel Schrötter is 15th after the first few minutes and Tom Lüthi is 20.

Moto2 FT1: A lot going on on the track

In the first few minutes, all 30 drivers are on the road and shoot themselves. Bo Bendsneyder marks the first best time with 2: 00.644 minutes. But Sam Lowes has better split times.

Moto2 FT1: The wind is getting stronger

The flags around the route show that it is quite windy. The light Moto3 bikes didn’t have too much of a problem. Now it is Moto2’s turn. In the test, Sam Lowes was one of the strongest drivers, while Marcel Schrötter and Tom Lüthi were not among the leaders. Schrötter said that it didn’t work out with one flying lap. After joining the SAG team, Lüthi is still looking for the best possible coordination.

The training comes to an end and Rookies Cup champion Pedro Acosta secures the fastest time. The Spaniard, who rides in the Ajo-KTM team, is stopped with 2: 05.809 minutes. Darryn Binder follows in second place, 0.089 seconds behind.

Ryusei Yamanaka from the Saxon PrüstelGP team, Jaume Masia and John McPhee complete the top 5. It is good training for Prüstel, because the Swiss Jason Dupasquier follows in seventh place.

Maximilian Kofler finished the first training session in 19th place. He is 1.5 seconds behind.

The last minutes are running and red sector times light up for many drivers. Masia is the new runner-up behind Toba. Rookie Guevara continues to claim third place. However, the ranking will still mix significantly.

Kaito Toba, Kofler’s team-mate, improved the best time to 2: 06.420 minutes. This means that the Japanese has just under half a second ahead of the rest of the timesheets.

Toba leads the ranking ahead of Izan Guevara, Andrea Migno, Niccolo Antonelli and John McPhee. Kofler has fallen back to tenth place. A total of 28 drivers are at the start.

Kaito Toba sets a new best time with 2: 06.554 minutes and Maximilian Kofler improves to 8th place! That is a good step forward, because the Upper Austrian did not collect a World Cup point last year.

Moto3 FT1: Everyone on the move

There is a lot of traffic again and Foggia, Artigas and Fenati are now also on the track. The used tires will continue to be used. That’s why we occasionally see sector best times, but not an absolutely fastest time.

In the test, Jaume Masia set the best time with 2: 04.263 minutes. So there is still a lot missing about this brand. The heat definitely plays a role. In the evening, the lap times will be significantly faster.

Migno’s best time is 2: 06.905 minutes. Most drivers have done five or six laps. Many finish the first run and pit. After the first attempt, Maximilian Kofler is in 19th place. The track is a bit sandy at times, but it’s not bad.

Christmas 2021: Pro model of the Nintendo Switch including an exclusive...

The first loops are taken! –