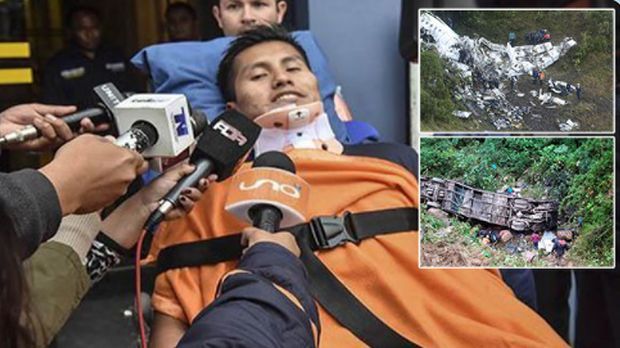 Munich – In November 2016, the tragedy surrounding the plane crash of the Brazilian soccer team Chapecoense rocked the sports world.

At that time, 71 passengers on the charter plane died, including almost all of the players on the team that was on the flight to Colombia for the first leg of the Copa Sudamericana at Atletico Nacional.

The official cause of the accident was a lack of fuel, which is why the machine crashed on a mountain slope shortly before the city of Medellin. Only six people survived the plane accident: three players, a journalist who died of a heart attack in 2019, and two flight attendants.

One of these flight attendants, the Bolivian Erwin Tumiri, recently jumped at death a second time within a few years. In his home country he survived a bus accident with 21 fatalities with minor injuries. On the journey between the Bolivian cities of Cochabamba and Santa Cruz, the bus came off the road and fell a good 150 meters down a slope.

“I crawled out like a cat, my knees hurt a lot,” said Tumiri from his sickbed. He was one of 30 passengers who survived the bus accident.

Disappeared from the radar after take-off: Military helicopter crashes in Turkey...

Kajal and braces: Jenny Lange was so cute as a teen!

Storm of love: Surprising farewell: This series star gets out!

Higher numbers because of the bus ride to the demo

Criticism of the sluggish start: This is what Europe’s strategy for...