“We went from a solemn mood to crisis mode. 2020 was a demanding year, ”said Mario Freis, CEO of the financial brokerage group OVB Holding AG, describing the situation in the 50th anniversary year. But contrary to the negative expectations twelve months ago, he was able to describe it as “very successful” at this year’s online press conference.

At the end of March 2020, Freis was still assuming a decline in brokerage income and operating profit in the current financial year (VersicherungsJournal 1.4.2020). Now, at EUR 270.6 million, he was able to present the highest brokerage income in the company’s history. They rose by 4.9 percent. 77.3 percent of sales come from abroad.

In Germany, the EBIT increased by 2.6 percent

The result from operating activities (EBIT) climbed in the group by 5.7 percent to 14.9 million euros. OVB, active in 15 European countries with 5,248 full-time financial brokers, achieved an EBIT increase of 28.0 percent to 14.2 million euros in Central and Eastern Europe. Particularly notable increases were achieved in the Czech Republic, Romania, Poland and Slovakia.

In contrast, the EBIT of the Southern and Western Europe segment fell significantly by 13.5 percent to 4.2 million euros. This development was explained, among other things, by the increased effort for digitization. In Germany, EBIT increased by 2.6 percent to 8.1 million euros. “OVB increased sales, earnings and operating cash flow,” said CFO Frank Burow.

The number of financial intermediaries is declining

The Central and Eastern Europe region accounted for almost half of the total sales commission of EUR 270.6 million (EUR 130.4 million). Southern and Western Europe contributed 78.9 million euros or 29.1 percent.

In Germany, sales only decreased slightly by 0.4 percent from 61.6 to 61.3 million euros in absolute terms. Since the other two regions grew by 6.0 and 7.6 percent respectively, the share of sales attributable to Germany fell from 23.9 to 22.7 percent. As a result, the smallest segment has lost even more importance.

These developments are also reflected in the number of financial intermediaries. In Germany it shrank from 1,295 to 1,242. In Central and Eastern Europe, on the other hand, it rose by 5.2 percent to 3,071 and in Southern and Western Europe by as much as 9.4 percent to 935. 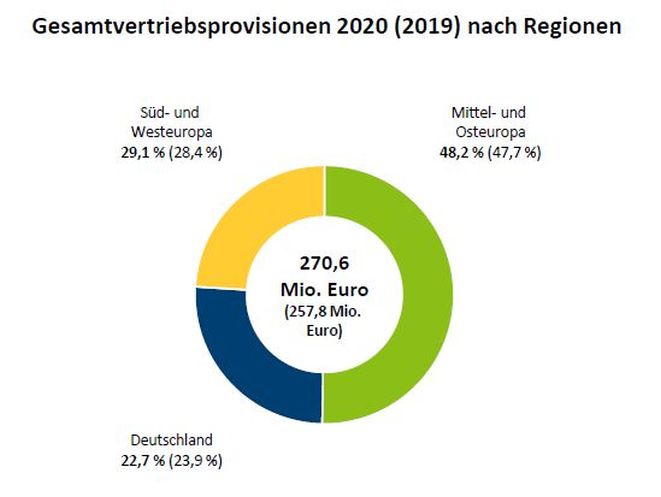 The number of German customers continues to decline

The share of products in the home savings / financing segment fell from 21.0 to 17.8 percent. The property, legal protection and accident insurance business in Germany accounted for 14.0 (14.1) percent.

Across the group, the number of customers rose by 5.5 percent to 3.96 million. Pension products dominated with over 50 percent of new business: fund-linked products accounted for 33.5 percent, others 22.7 percent and state-subsidized 9.6 percent. Other insurance companies fell from 18.7 to 16.6 percent. 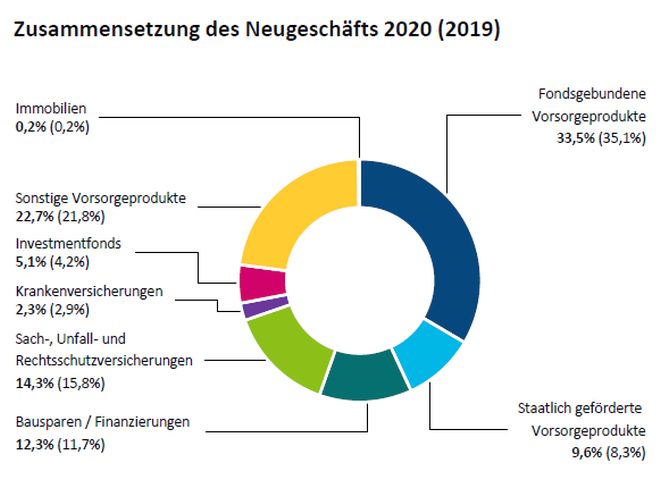 The negative result of the central areas including consolidation effects widened from 9.7 to 11.6 million euros. The financial result fell from 1.3 to -0.2 million euros. After minority interests, the group result was 10.5 million euros after 11.0 million euros in the previous year. The dividend should remain stable at EUR 0.75 per share plus EUR 0.25 anniversary bonus.

OVB expects to continue on its growth path in 2021 as well. The number of agents and customers should increase. A slight increase in brokerage income and a stable operating result are expected – subject to corona-related uncertainties.

Change of office from Trump to Biden – security arrangements in...

“Querdenker” demo on New Year’s Eve is expected to be banned...