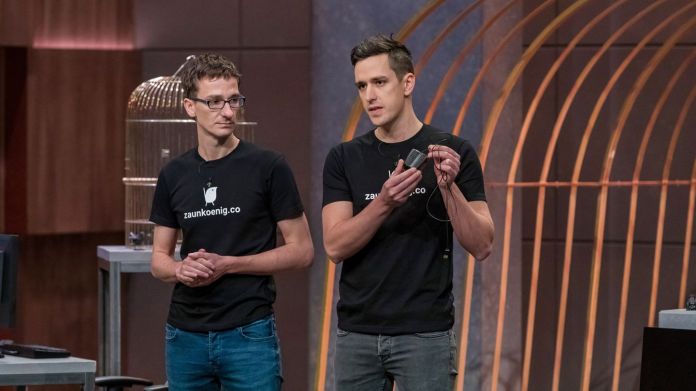 “The Lion’s Den”
Out of the mouse: This stupid deal fell through after the show

You can see in the video: “The Lions’ Den” – these are the jurors and that’s how they got rich.VOX has been celebrating great success with “Die Höhle der Löwen” since 2014. The jurors or the so-called “lions” need to be won over with inventions or clever business ideas for an investment. Several million dollar entrepreneurs take turns on the five “lions” chairs.
One of them is Carsten Maschmeyer. Born in Bremen, he is one of the best-known business people in Germany. Maschmeyer comes from a humble background and discovered his passion for money and finance early on. Maschmeyer sold his company, the financial services provider AWD, in 2007 for a sum of 1.2 billion euros. In the “Den of the Lions” he mainly invests in founders he likes. His motto is: “There are no good companies. There are only good entrepreneurs ”. Juror Judith Williams used to be a soprano on stage across Europe. In 1999 she started working as a sales presenter for the teleshopping channel QVC and then switched to the shopping channel HOT, which is now known as HSE24. She later founded the “Judith-Williams-Marken-Welt”, which carries fashion, jewelry, perfume and more than 800 luxury cosmetic products. With her company, Judith Williams ensures a total annual turnover of well over 150 million euros in teleshopping. Ralf Dümmel is the investor with the most deals on the show. The jury has already invested more than ten million euros. The head of the DS Produkte group of companies invented the Wassermaxx soda maker over 20 years ago and has now a considerable fortune of around 25 million euros Juror Dagmar Gabriele Wöhrl is known from the political scene. She sat for the CSU in the German Bundestag between 1994 and 2017. The former Miss Germany has a great passion for cultural and social issues. She and her husband, entrepreneur Hans Rudolf Wöhrl, own them a proud fortune of 150 million euros. The former Formula 1 world champion Nico Rosberg joined “Die Höhle der Löwen” in 2020. The racing driver has been giving full throttle as an investor and sustainability entrepreneur in the field of green mobility and future technologies since 2016. His fortune is now estimated at over 50 million euros.

Investor Ralf Dümmel is the hardest-working dealmaker in the start-up show “Die Höhle der Löwen”. But with the lightest computer mouse in the world, Carsten Maschmeyer and he broke the deal after the show.

With a high-tech mouse for gamers, the brothers Patrick and Dominik Schmalzried could be seen on Monday evening in the “Cave of the Lions”. The “Zaunkoenig M1K” developed by them is supposedly the lightest computer mouse in the world at 23 grams – and is supposed to give professional gamblers the decisive advantage in competition with other players.

The investors Ralf Dümmel and Carsten Maschmeyer were convinced in the Vox show and promised 100,000 euros for a 25 percent company share. But after the show, the deal fell through, like stupid stern confirmed. The Zaunkoenig is a “real innovation” and a “great product”. But: “Unfortunately, it turned out in further discussions that we do not have the same strategic directions for the future – we support Dominik and Patrick and are of course at their side with advice and action,” says Dümmel.

Broken deals after the show are more common in “Die Höhle der Löwen”. For series investor Dümmel, however, it is rather unusual that he does not follow through with a deal that was sealed on TV.

The crux of the matter is the scroll wheel

Co-investor Maschmeyer also distanced himself from the deal after the broadcast. He justified the withdrawal with a technical defect in the product, which was only noticed afterwards: the lack of a scroll wheel. “The scroll wheel is essential for many gamers – a tool that Patrick and Dominik did not have,” said Maschmeyer, according to the founding scene.

In the meantime, the founders, who were successful as e-athletes themselves, have made improvements and developed a new version: The “Zaunkoenig M2K” has a scroll wheel and, thanks to its super-light carbon fibers, still weighs only 24 grams. On their website, the gamer brothers advertise the development as the “Porsche on your mouse pad”. With a corresponding luxury price: the professional mouse costs a whopping 299 euros.

News from the Super League – From ball moss with concussion...

Germany should get EU aid of 455 million euros because of...

Pop singer Patricia Kelly in the emergency room – and has...