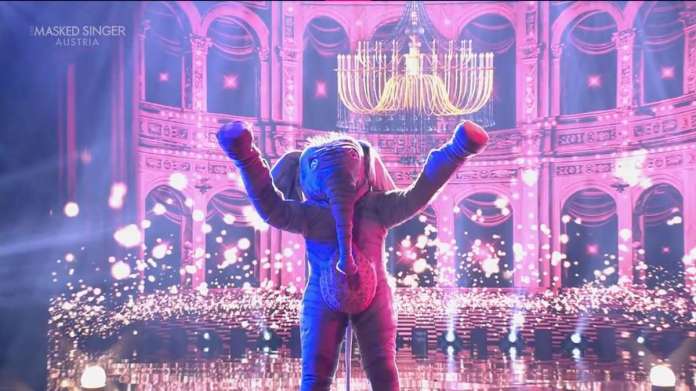 “The Masked Singer” is also a great success in our neighboring country. In the Austrian version, the sweet baby elephant won.

Vienna – The last mask fell at “The Masked Singer” in Austria! In this final, the Danube Nymph, the Gelse and the baby elephant competed against each other and sang for victory. But only one was allowed to take the trophy home with them that evening. The baby elephant is the winner – when he unmasked, the sensation was great. A well-known singer turned out to be under the costume.

It’s Sandra Pires (“I Feel So Alive”)! Like the online portal Promiflash reports, the 51-year-old named her elephant costume “Elli”. “Sorry, look at that face. We became best friends and I talked to her, “admits the singer after the revelation. Sweet! In the finale she performed the song “Never Enough” by Loren Allred and convinced the advice team and the TV viewers.

Sandra Pires is following in the footsteps of the winner from the last TMS season in Austria: Nadine Beiler. And here in Germany, too, it will be exciting – because today (Tuesday, March 23) we have the big “The Masked Singer” final. There will be a choice between the leopard, the turtle, the dinosaur and the flamingo – only one can become the winner of the fourth TMS season in the evening. Do you have a secret favorite?

Ruth Moschner and Rea Garvey are part of the current advice team – at the finale they are supported by entertainer and presenter Joko Winterscheidt. Until recently, many viewers had appreciated it among the monstronauts. Who could follow in Sarah Lombardi’s footsteps with us? The singer won the third season of “The Masked Singer” in autumn 2020 with her creepy and glittering skeleton costume. The finale will take place on Tuesday evening (March 23) at 8:15 pm on ProSieben. All information about “The Masked Singer” is now available in our brand new, free TMS newsletter. If you are also interested in other shows, you can also subscribe to our TV newsletter.

Fight against the corona virus: how safe is vaccination for cancer...

Messi future uncertain – farewell to the end of FC Barcelona?

Lastpass trims the wings of the free version

willhaben presents the job trends for 2021