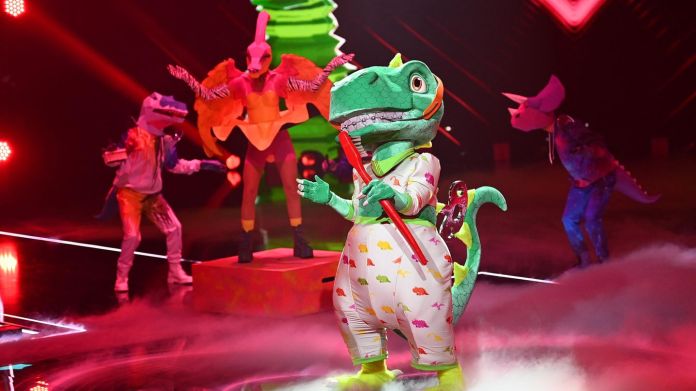 Tears of joy at the flamingo, the turtle hooks under it and the claws of the leopard are clipped. The dinosaur in pajamas wins – and Rea had the right nose.

Admittedly – on these pages too, the Leopard was the winner early on, very early on, practically from the start. Powerful voices, sophisticated, enigmatic, the title actually as certain as a Bavarian foosball troupe, but then it turned out quite differently. Defeated by someone who actually died out long ago. But, first things first, always one after the other. With the turtle you were also sure at this point that it just had to be Thomas Anders. Ruth and Rea saw it that way too, even if at the sight of his hair, worn open to celebrate the day, the question slipped out whether it had actually always been so gray. Problems that guest juror Joko Winterscheid does not have to contend with for the time being.

Gray is also a very good keyword for him, the horror of his top, a jacket covered with show and station logos, a mixture of a waiter’s jacket and Formula 1 suit from black and white television. What the heck, advertising has to be. Like his chairman at this point, Joko came not only to give advice, but also to do a promo. In return, however, there was neat advice on top, even some in which prohibited substances played a role. In contrast to Ruth’n’Rea, Joko guessed Campino for the tortoise, and if he should be – greetings to the clubbers in Ibiza – then the tall guy with the glasses would “take LSD with you all today”. Well, those are prospects, even if no mind-expanding drugs were administered here after all, because the turtle was actually the good Thomas Anders.

That will not have been really clear when it comes to the voice of the callers. In the case of the four finalists, the performance density was very close. The dino sang “Control” by Zoe Wees very solidly. With Calum Scott’s “You Are The Reason”, the flamingo put pressure on the lacrimal gland, including his own. And while the leopard gave a classic “Carmen” lecture, it wasn’t quite enough for Turtle-Thomas. He wore it with composure, sweaty (“25,000 degrees in costume”) and pleasantly relaxed.

The remaining three candidates ran again. The dinosaur adapted Robbie Williams’ “Angel” competently and not only convinced Ruth (“Otto Waalkes is not”) and Joko (“I don’t think enough around the corner”), but above all Rea. In his pajamas he saw none other than “German Robbie” – and like his best friend for weeks – namely Sasha. The flamingo had apparently got hold of the sing pearls and vitamins twice, here people danced, posted, and trilled as if there was no tomorrow. Which in the end didn’t exist, because – after the female leopard also did “Comfort me” with top marks – it caught the feathered friend. In a kind of creative defiance, Joko had guessed Thomas Hajo, Rea, in order to somehow also swim against the current, Giovanni Zarella, only Ruth was right this time: Ross Antony hid himself in the costume of the dashing flamingo.

In the final finale, the ultimate showdown between the dinosaur and the leopard, both with their respective favorite song from the previous shows. The toothbrush Zampano with the iron teeth swept his way through the medley of “Rapper’s Delight” and “Get Lucky”. The leopard let it rattle again with “Survivor”, which especially Joko, exposed to the magic of the headphone sound, really picked up: “I bow”. With his claim to have seen and above all heard the upcoming winner here, the guest at the desk leaned a little too far out of the window. Suddenly there was some vibration in the air, as if it couldn’t be enough for the favorite with the majestic monocle on the last few meters. And indeed: when the final bell tinkled at the decision, the notary had counted it to the end with a trembling hand, the winner was certain – the dinosaur.

And after the leopard had shed her incognito and with Cassandra Steen that great soul diseuse came to light that the jury had suspected for weeks, the dinosaur was also upset. Lo and behold: It was, as often assumed, Rea’s best buddy Sasha. Two problems that the fourth season winner had to deal with: the perspiration in his costume – and the fact that he had to “lie to Rea so hardcore”. However, he had long since forgiven him, and after the winner of last season, Sarah Lombardi, had presented the winner of this season with the oversized trophy, there was an appetizer in the confetti rain: The fifth season is already wrapped up. It continues in autumn.

New Year’s Eve 2020 in Berlin with or without guns?