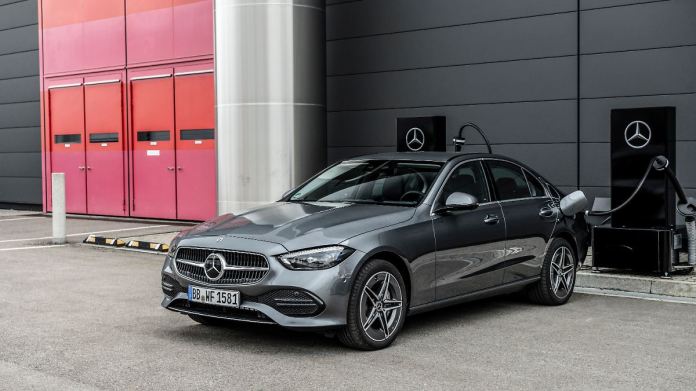 Plug-in hybrids have the reputation of being sham: the electric range is too short, the fuel consumption is far too high. The new hybrid models of the Mercedes C-Class are supposed to do better: 100 kilometers of electric range, optionally combined with an economical diesel or gasoline engine.
The fact that plug-in hybrids are in vogue is probably not only due to the fact that you can cover a certain distance with them purely electrically, but preferably to the environmental bonus that the federal government has offered for vehicles with such a drive. If the car costs over 40,000 euros, the federal government and the manufacturer pay a total premium of 5625 euros, which the buyer can then deduct from the total price of his part-time electric vehicle. The basic requirement for funding, however, is that the car can travel at least 50 kilometers purely electrically. According to the data sheet, many plug-in hybrids can do this, but in reality the range usually shrinks to around 35 kilometers.

But things also seem to be getting better. As part of the new Mercedes C-Class, a new plug-in hybrid is now also going to dealers. According to the WLTP measurement method, it should not only drive 50 kilometers purely electrically, but 100 kilometers. The basis for doubling the range is provided by a high-voltage battery developed in-house by Daimler, which consists of 96 cells and provides a total capacity of 25.4 kWh. Ntv.de wanted to find out whether these 100 kilometers could actually be achieved during a first ride alongside Matthias Klöpfer, Mercedes-Benz plug-in hybrid development. In fact, such an electric range would be able to free the plug-in hybrid from the reputation of being sham. As a rule, with 100 electric kilometers it should then also be possible to cover the short distances that arise every day without the assistance of the combustion engine.

The only manufacturer with a diesel plug-in hybrid

But that’s not all. Long-distance drivers could also benefit for the first time from the combination of a combustion engine and an electric motor, because Mercedes is the first and only manufacturer to offer a diesel as a plug-in hybrid. In the Mercedes C-Class, ennobled with the abbreviation 300de on the tailgate, an efficient four-cylinder diesel pumps under the bonnet.

If a boost, i.e. additional power, is required, a further 129 hp are made available to the 200 hp of the engine in order to support overtaking or moving off. The electric motor works on the side of the combustion engine, turns additionally or alone on the front axle and is fed with electricity by the battery described above. In this combination, the diesel plug-in hybrid should not only offer itself as a sovereign electric vehicle in everyday use and on short journeys, but also as a long-haul vehicle. How exactly this is in reality cannot be said here yet. Since the overall technical design is identical to the one that moves the four-cylinder gasoline engine with the same electric drive that was used for the ride, a lot can be deduced.

The gasoline engine is namely with 203 hp and anything but underpowered. If necessary, the electric motor provides support with 129 horses or provides the purely electric propulsion of the C-Class. Even the system torque of both combinations is the same at 440 Newton meters. In the interplay of the two units, the on-board electronics for the combustion engine showed a consumption of 2.8 liters at the end of a 70-kilometer test drive. The battery was loaded with 12.3 kWh, which promised a remaining range of another 45 electrical kilometers.

There seems to be more to it

In fact, the 70 kilometers could certainly be managed purely electrically and in the end there would have been at least enough energy for another 30 kilometers in the battery. And that without the driver in the form of Matthias Klöpfer having to chastise himself. Of course, and to say otherwise, it would be nonsense if a plug-in hybrid is not used permanently. The components would allow that, including the sports program and the performance, but it would simply not make sense. If you need the short sprint, you get it and that with a lot of emphasis. If you want to drive purely electrically, you can do it and miss nothing in the C-Class up to a speed of 140.

The only thing that reminds him that the propulsion takes place exclusively via the electric motor is the smoothness and the lack of movement of the pointer in the digital tachometer. If the combustion engine is switched on, it happens so imperceptibly that the engine can only be heard acoustically by the occupants with a clear movement of the right foot. “I’m also very proud of the fact that we are now at a level at which the interplay in the start and partial load range between the drives is only visible to the driver via the rev counter,” enthuses Klöpfer.

In order to keep fuel consumption and CO2 emissions low, Mercedes has also waived the option of charging the battery with the combustion engine while driving. “If I use the charge mode incorrectly, it does not make sense in terms of energy,” says Klöpfer. “Whereas shifting the load point makes perfect sense. As an example: If the car only needs 10 kW for propulsion, the combustion engine runs at 20 kW. 50 percent, i.e. 10 kW, is then shifted into the battery.”

In short: anyone who whips across the autobahn at high speed in a high load range, driven by the combustion engine, will not charge the battery in this way. For the simple reason that it would be absolutely inefficient in the face of increasing fuel consumption. On the other hand, those who drive quickly with a light foot on the accelerator will have used less fuel in the end because the electric motor intervenes electronically. “The motor has the best efficiency at 90 percent of its torque, but below 2000 revolutions,” said Klöpfer. “In this respect, we are simply reversing the principle here. Now the combustion engine no longer works for the battery, but the other way around and high speeds and unnecessary switching operations are avoided.”

Future drivers of the C-Class plug-in hybrids can also avoid long charging times. If you have the optional 55 kW DC charger on board, you will be able to get your empty battery back up to speed on a quick charger with direct current in just 30 minutes. Anyone who shies away from this additional expense or who is satisfied with charging on the domestic AC network has an 11 kW charger for three-phase charging in the car as standard. The time required here has not yet been quantified, but should not be bridged with a coffee.

More space in the luggage compartment

The arrangement of the battery has also improved a lot compared to its predecessor. On the one hand, the luggage compartment no longer has a step; on the other hand, it now offers through-loading. The T-Model has really benefited here. The length of the luggage floor increases by 6.3 centimeters to 10.43 centimeters. That may not seem like much at first glance, but tall beverage crates now fit under the cover blind again. The luggage compartment volume is 360 liters, 45 liters more than the predecessor, but 130 liters less than in the normal T-model. If the rear seat back is folded down, the volume increases to 1375 liters. Air suspension and level control at the rear are standard equipment on the station wagon and sedan.

Overall, the combination of the C-Class as a plug-in hybrid seems to be absolutely consistent. In keeping with the spirit of the times, the driving experience has been clearly shifted towards e-mobility, but without forgetting that the mobility that has been learned is primarily geared towards freedom in the choice of route and route length. In view of the 100 kilometers of electric range, the option to charge in 30 minutes and a recuperation power of 100 kW, there should be no more conceit here, even in electric operation. In addition, the navigation system intervenes if required, taking into account the topography, speed requirements and traffic conditions on the route in order to use both types of drive as efficiently as possible.

Of course, the recuperation performance can also be independently influenced while driving using the paddles on the steering wheel. However, Mercedes has dispensed with the D– program, which stood for the “one pedal feeling” in earlier electric vehicles and plug-in hybrids. If you want the car to come to a standstill when you release the accelerator without the hydraulic footbrake, you can simply switch to D-. “We found that the second D stage was just confusing. That is why we waived it for a more natural driving experience, but not the recuperation performance that can be expected here,” explains Klöpfer. And it all feels really good in the passenger seat. Of course, ntv.de will, as soon as possible, take the car under its feet and report on these pages about how it drives and whether ranges and loading times can actually be maintained.

Brigitte Annerl on stadium project: “We look at what is affordable...

Ellen DeGeneres: The presenter has Covid-19

Fetched back from Syria by the federal government: IS supporter Leonora...