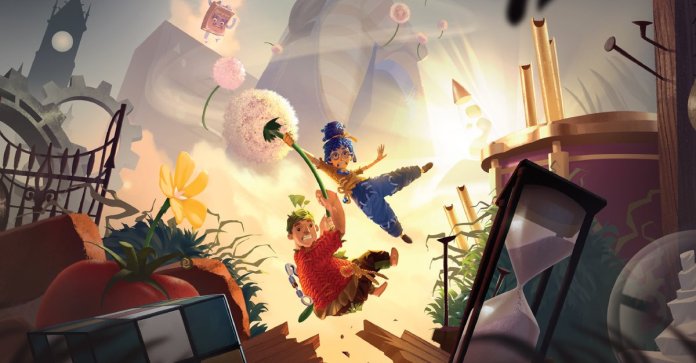 Now that we’ve finally played It Takes Two through, we can say: It’s worth it! Here’s why you shouldn’t miss this co-op adventure.
Languages:German English

Hazelight Studios wowed a lot of gamers with their co-op hit A Way Out. When designing the new title, however, the communication must have looked like this:

“What kind of game do you want to make next?” – Hazelight Studios: “Yes.”

It Takes Two is so colorful and varied that it is difficult to find the game to be classified in an exact category. One thing is certain, however: you will definitely not regret the purchase.

This is what awaits you in It Takes Two:

The plot of It Takes Two is quickly explained. The two parents May and Cody are about to divorce and feel compelled to teach it to their daughter Rose. However, she does not want to accept the decision and makes two dolls out of wood and clay to represent her parents.

The story of the game is divided into seven chapters, which are divided into a total of 37 levels is dealt with. In it you swing, shoot, hop and puzzle your way through your shed, your front yard, your daughter’s nursery, a cuckoo clock and much more.

The highlight: No level is even close to the other. Once you have gotten used to a weapon or a game mechanic, it is immediately replaced by another. And that’s good! It Takes Two does what A Way Out couldn’t in some places – it just doesn’t get boring.

So if you don’t enjoy a mechanic, don’t panic! Waiting behind the next door a new surprise.

The game world of It Takes Two was also included great attention to detail designed. Tighter level tubes can be overcome quickly, while larger areas beckon with lots of small Easter eggs and opportunities for interaction.

Although these are absolutely irrelevant for the course of the game, they breathe a lot of life into the game world. Larger areas such as the castle in Rosie’s room or the winter level invite you not only to explore, but also to linger.

Those who prefer to sprint through the levels to end the game quickly will miss out on a particularly tasty treat: Hazelight has it throughout the game 25 competitive mini-games hidden. From snail races to icicle throwing to a dignified round of chess, there is something for everyone.

The two protagonists play very differently. May and Cody receive weapons and other items over and over again in the course of the game, which will only bring you to your destination in combination. While Cody can, for example, shrink or enlarge himself in a level, May is given shoes with which she can run up the walls at certain points.

So you are repeatedly forced to create a walkable path for your teammate – you won’t get very far on your own. It Takes Two lives up to its name. The game only works for two. Not three, not alone. Only with two players in local co-op or online.

The story takes off during the about 14 hour campaign a rather secondary role. It quickly becomes clear that the focus is more on fun. But that’s no problem. Couples who quarrel and then try to find each other again are old hat in the entertainment industry.

You don’t have to worry about the level of difficulty either. It Takes Two is mostly a platformer, but you have to no godlike talent as prove in some Mario Maker levels.

The boss fights are also feasible – even if you will die a few times on some of the bosses. However, the levels are never so difficult that they harbor real potential for frustration.

Are you looking for more multiplayer food for you and your group? May I help you:

The style of the game, which at first glance appears childlike, also exudes a very special charm. With great attention to detail and a pinch of black, very adult humor, the game pulls you under its spell.

Even though the lighting mood and the particle effects look really great, It Takes Two is not as much of a resource hog as one might suspect with the graphics. So the game runs even on a mid-range PC very fluid with high resolution.

Only smoke-like effects can lead to brief drops in the frame rate. But that is usually not that noticeable.

Can your PC manage It Takes Two? He should be able to:

Criticism is a must

With all the beauty there is also little niggles, that It Takes Two plagues its players with. The Camera control is so unstable in some places that a controller almost broke in the test out of frustration.

That too Combat system would need a bit of fine-tuning in some places. Sometimes it seems as if one player has more to do than the other because, for example, you are limited to hand-to-hand combat due to your current weapon, while your teammate with a fat tendril on his head has a much longer range.

But there is also a small point of criticism – not always all possible uses of your current items self-explanatory. The fact that we can use the said tendril for fighting only happened to us in the test when we accidentally pressed the wrong key.

What was particularly annoying was that in our version a boss fight so bugged was that one player could no longer move from the spot and was stuck with the boss in a corner of the map, while the other player seemed to have left the map and was now standing around somewhere inaccessible and immortal.

Since we played a pre-release version, we hope that at least this bug will be resolved by Release on March 26 has been fixed.

Should you buy It Takes Two?

Yes! All of the criticisms mentioned are of a rather minor nature and therefore no reason to demand the 800 euros promised by developer Josef Fares. If you’re good with a Controllersteuerung copes and finally back again Fancy a lively co-op experience you should definitely give It Takes Two a chance.

Tip: If you buy It Takes Two, you will automatically receive two keys. So if you don’t want to play in local co-op, you can share the price with a friend.

The Ultimate Skyrim Quiz: How Well Do You Really Know The Elder Scrolls 5: Skyrim?

“It was already clear after the first few hours of play: This game is a bombshell. For a mere 40 euros you get a brightly colored co-op adventure with lots of humor that never gets boring for Xbox One, Xbox Series X, PS4, PS5 and PC. The few points of criticism reduce the fun of the game only moderately, which makes It Takes Two a really recommendable experience with boyfriend, girlfriend and Co. during the lockdown. ”

Equities New York Outlook: After a short break, investors are back...

Balotelli before moving to Berlusconi Club Monza – medical check on... 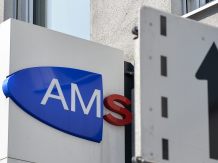