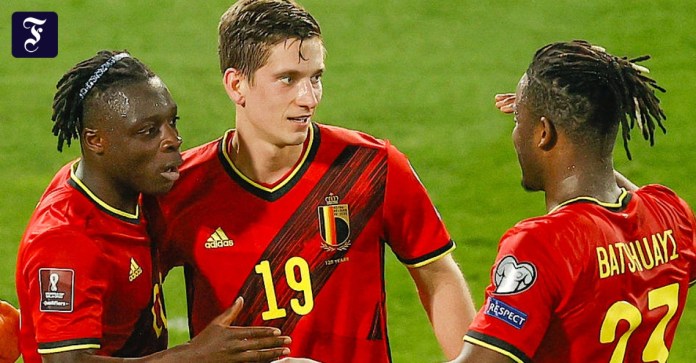 Dhe five-time world footballer Cristiano Ronaldo has put an end to his goal doldrums with the national team and led Portugal to a second victory in the third group game in qualifying for the 2022 World Cup. The European champion turned the game in the world number 98th Luxembourg and won 3: 1 (1: 1) on Tuesday.

The brave home side took the lead after half an hour through Gerson Rodrigues. Just before the break, Diogo Jota equalized. The attacker from Liverpool FC scored twice in the 2-2 draw against Serbia. After the restart, Ronaldo, who had previously recorded four goalless games for his country, put Portugal in front. The final point was set by Joao Palhinha (80th minute). In Group A, Portugal took first place with seven points, ahead of the Serbs with equal points, who had prevailed 2-1 (1-0) in Azerbaijan in the early evening. Fulham’s Aleksandar Mitrovic scored both goals for Dragan Stojkovic’s team.

Turkey, on the other hand, missed their third win in their third game. In the 3: 3 (2: 1) against Latvia, the home side gave up two two-goal leads. Kenan Karaman from the second division Fortuna Düsseldorf and the former Leverkusen-based Hakan Calhanoglu met in the first round. Norway can also count on an accurate striker from the Bundesliga. Erling Haaland from Borussia Dortmund was again unlucky, but Leipzig’s Alexander Sörloth met in a 1-0 (1-0) win in Podgorica, Montenegro.

The Netherlands climbed to second place in Group G with six points and because of the better goal difference. Bondscoach Frank de Boer’s team beat Gibraltar 7-0 (1-0) away. In the first half, only Feyenoords had scored Steven Berghuis (41st) for Frank de Boer’s team, in the second half the Dutch turned up and scored six times. Depay (61st and 88th), the former Gladbacher Luuk de Jong (55th), Wijnaldum (62nd), Malen (64th) and van de Beek (85th) were the scorers.

In Group E, Belgium took the lead in the table. The Red Devils dominated Belarus at will and removed all doubts at 8-0 (4-0) before the break. In the parallel game, Wales won 1-0 (0-0) against the Czech Republic. With the guests, Leverkusen’s Patrik Schick saw the red card after an assault (48th).

Russia conceded their first defeat at 1: 2 (0: 1) in Slovakia, while Croatia struggled for a long time with 3: 0 (0: 0) against Malta. Ivan Perisic, Luka Modric, who converted a penalty, and the Wolfsburg professional Josip Brekalo redeemed the vice world champion. In addition, Slovenia lost to Cyprus with 0: 1 (0: 1).

“Want to prevent night rioting”: Police are preparing for the second St. Gallen night of riot

AstraZeneca Vaccine: Saving What Can Be Saved

Merkel on AstraZeneca: “Must vaccines be able to trust”

Duchess Meghan learns of gossip on Whatsapp of a friend

Corona pandemic: The AstraZeneca vaccine is only given to people over 60 in Germany

Astra-Zeneca only in individual cases for people under 60

General Election in Venezuela – Boycott of the Opposition – Politics...

Tracks between Frankfurt-West and Bad Vilbel are still closed