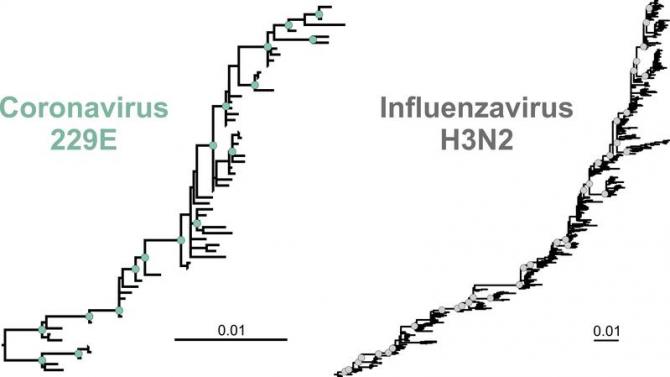 Do COVID-19 vaccines have to be regularly readjusted in the future?

Influenza viruses are masters at evading human immune reactions: They change so quickly that the antibodies that the immune system produced after an earlier infection or vaccination can no longer recognize them well. This means that the vaccine has to be laboriously adapted in practically every flu season. SARS-CoV-2 has also produced various mutants, some of which, such as the so-called South African variant, partially undermine the immune reaction. The first vaccine manufacturers are therefore already developing new versions of their vaccines. What does that mean for the future? Will COVID-19 vaccines like the flu vaccines need regular updates?

In order to be able to assess whether SARS-CoV-2 will show an equally pronounced “flight” from the immune system as influenza viruses in the long term, Charité virologists have examined the genetic development of cold coronaviruses. Four such comparatively harmless coronaviruses are known, which cause around ten percent of colds worldwide and have been circulating in humans for much longer than SARS-CoV-2. They also enter human cells via the so-called spike protein, which forms the eponymous “crown” on the virus surface and against which all previous COVID-19 vaccines are directed.

For the study, the research team tracked how the spike gene of the two longest known coronaviruses 229E and OC43 has changed over the past 40 years. To do this, the scientists compared the sequences from samples of different ages that had been stored in a gene database and developed a family tree for both coronaviruses based on the mutations that had developed over time. For comparison, the researchers looked at the influenza strain H3N2, which evades the human immune reaction particularly efficiently.

The calculated family trees of both the coronavirus and the influenza virus had one thing in common: They showed a pronounced staircase shape. “Such an asymmetrical pedigree means that one circulating virus line is regularly replaced by another because it has a survival advantage,” explains Dr. Wendy K. Jó, first author of the study from the Charité Institute for Virology. “This is an indication of what is known as an antigen drift, i.e. a continuous change in surface structures through which viruses evade human immune reactions. The domestic coronaviruses escape the immune system as does the flu virus. However, you also have to look at the speed with which this evolution is taking place. ”

To do this, the research team determined the evolution rates of the three viruses. While 25 mutations per 10,000 genetic components accumulated in the influenza sequence per year, there were only around six mutations in the coronaviruses. This means that the common coronaviruses changed four times more slowly than the flu virus. “With a view to SARS-CoV-2, this is good news,” summarizes Prof. Dr. Christian Drosten, Director of the Institute for Virology and scientist at the German Center for Infection Research (DZIF).

Because the rate of evolution of SARS-CoV-2 is currently estimated at around ten mutations per 10,000 genetic components per year, significantly higher than that of the common coronaviruses. “This rapid genetic change in SARS-CoV-2 is reflected in the emergence of many different virus variants worldwide,” explains Prof. Dr. Jan Felix Drexler, head of the study from the Institute of Virology and DZIF researcher.

“The reason for this lies mainly in the high number of infections during the pandemic: where there are many infections, a virus can develop more quickly. Based on the evolution rates of domestic cold coronaviruses, we assume that SARS-CoV-2 will also change more slowly as soon as the infection process subsides – i.e. after a large part of the global population has built up immune protection either through the disease itself or through a vaccination. We therefore assume that the COVID-19 vaccinations will have to be checked regularly during the pandemic and adjusted if necessary. As soon as the situation has stabilized, the vaccinations will probably be usable for longer. ”

Edeka voucher: customer turns over the coupon and can’t believe his...

Australian Open: Nick Kyrgios – “I won’t play without a spectator”...

Star Wars: Boba Fett is said to have its own series

4-1! A “bitter defeat” for WAC against WSG Tirol