Indices in this article

?? Dividends can compensate for inflation

?? Compound interest also has an effect on stocks

In times of zero and negative interest rates, the dividend alone can justify buying stocks. Because government bonds with the highest creditworthiness or bank balances in the form of overnight money accounts offer their owners no income, let alone compensate for inflation.

The current inflation rate in Germany is not yet at a worrying level, as the corona pandemic is severely reducing the price surveys for consumer price statistics, but the European Central Bank is still aiming for a constant rate of inflation of at least two percent annually.

Money that does not generate any interest in such an environment automatically loses purchasing power year after year. Account holders who now have 10,000 euros in their savings book will have purchasing power of 8,203.48 euros in ten years, at a conservative rate of inflation averaging two percent per year, since the underlying goods prices are from 10,000 euros to 12,189.95 euros have made more expensive.

Private investors in particular can avoid or mitigate this dilemma by buying solid dividend stocks, because the profit distributions from robust and stable corporations usually exceed inflation with ease. In addition, a weatherproof dividend portfolio is much less volatile than the market as a whole, especially in turbulent times on the stock market.

In an extensive study, experts from Allianz Global Investors even found that a dividend strategy only performs worse than the overall market at an inflation rate of over ten percent. Correspondingly, investors who bet on high-dividend stocks were not only able to maintain their purchasing power, but even increase it at a lower inflation rate.

Additionally, it should be kept in mind that most solid dividend stocks grow their payouts on a regular basis. The investor’s personal return on distribution, i.e. the return on the capital employed, increases steadily.

Buffett and the Coca-Cola dividend

That star investor Warren Buffett has a strong predilection for dividend stocks can easily be seen in the portfolio of Berkshire Hathaway. So it is that Buffett has owned an extensive stake in the US beverage giant Coca-Cola for many decades. Since the group has not only consistently paid out its dividends for over 100 years, but has also increased it at least once a year for almost 60 years, Buffett’s personal dividend yield at Coca-Cola is now over 50 percent.

The real power of the dividend only unfolds when the distribution is not even debited from the deposit, but is immediately reinvested in shares. Investors who direct with their distributed dividends new shares buy, which in turn yield dividends, thus make use of the compound interest effect. This inconspicuous effect can help investors to ignite a real turbo return in their portfolio.

It was not for nothing that Albert Einstein described the compound interest effect as the eighth wonder of the world or as the strongest force in the universe. However, since the enormous potential of compound interest only becomes noticeable in the long term, this effect is unfortunately often overlooked or even ignored when investing money.

An example of the strongest force in the universe

The longer the investment period, the better

However, the compound interest effect or the so-called dividend-dividend effect only shows its potential after a few years; accordingly, assets grow only slightly faster in the early years than without reinvestment. In the long term, however, the exponential growth inherent in compound interest ensures a veritable explosion of wealth.

Since stocks offer their investors not only profit distributions, but of course also price gains, the preceding calculation examples are even too conservative. Investors who had invested 10,000 euros in papers from Reckitt Benckiser, Johnson & Johnson or Fuchs Petrolub over a period of 30 years could have achieved much higher profits.

However, only those investors who reinvested their annual dividend payments directly in the shares of the respective company would have achieved really outstanding fortunes during this period. An investment of 10,000 euros would have resulted in an amount of 230,000 euros with Reckitt Benckiser shares. After 30 years, the shareholders of Johnson & Johnson could even have enjoyed fortunes of 405,000 and 605,000 euros.

The DAX also benefits from the compound interest effect

As a so-called performance index, the leading German index is made up of price gains and reinvested dividends. In contrast to the Dow Jones, the DAX not only shows the pure price development of the individual shares, but also the dividend.

5:17 against Russia, 7:12 against Romania: Germany botched the Olympic qualification

“Chang’e 5” -Lander has arrived on the moon – miscellaneous things... 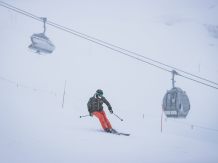 Help, the mutants are here!