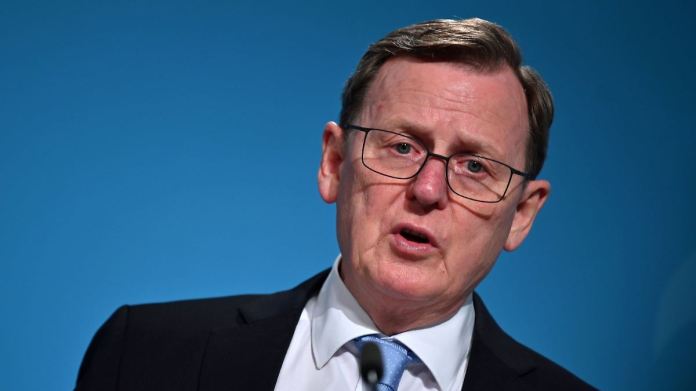 Same information for everyone
Ramelow wants to be present at MPKs

After the last Prime Minister’s conference with the Chancellor, Bodo Ramelow complained that he had looked at a screen for six hours and wondered what was actually going on. In order to avoid such annoyance in the future, Thuringia’s Prime Minister calls for changes to the regular meetings.
Thuringia’s Prime Minister Bodo Ramelow is pushing for changes to be made in the federal-state round on anti-corona measures. In an interview with Die Welt, the left-wing politician made the following demands: “First: mandatory attendance – everyone comes to the Chancellery. Second: The conference must be prepared in such a way that the conference only deals with two or three legally examined alternatives. ”

The Thuringian head of government complained that he was currently reading the drafts from the Chancellery and the SPD countries first in the media before receiving them himself. More information is usually not available to him. “That is dangerous because we simply cannot consult with our experts – and then they cannot say: Stop, you haven’t thought that through,” Ramelow told the “Welt”.

Ramelow attributes the debacle to the Easter rest period, which was canceled shortly after her announcement, to the fact that the related legal issues could not have been clarified during the nightly deliberations of Chancellor Angela Merkel and the state leaders. “We cannot repeat such conferences in this form,” said the left-wing politician in the “Spiegel top talk”.

Ramelow told “Spiegel” that he only found out about the “Easter rest” at the conference late one night. Before that, there had been “not even a hint”, although there had “obviously been negotiations for hours”.

Still better than the Czech Republic

Ramelow regrets that the Easter rest was not feasible. The measure “should have interrupted the over-dynamic increase in infections,” he told the “Spiegel”. Nothing has changed about this increase so far. From Ramelow’s point of view, Merkel and the state heads of government would have had to interrupt their negotiations and cleanly prepare and legally process the Easter rest the next day.

Merkel and the country leaders had agreed on Wednesday morning in a short-term video link that they would withdraw the decision to rest on Easter in the corona pandemic, which was only made on Tuesday night. The heads of the federal and state governments apparently underestimated the legal hurdles when making the decision. Merkel declared on Wednesday that this was “solely” her mistake, and she asked the citizens for “pardon” for the “additional uncertainty”.

Despite all the problems in the corona policy, Ramelow thinks that Germany is in “good” position with regard to the pandemic. The country does not even have a medical emergency situation like the Czech Republic, for example, he told “Spiegel”.

Pope elevates 13 men to the cardinal position on Saturday –...

Fight against Covid-19: Corona vaccinations at the family doctor planned after...