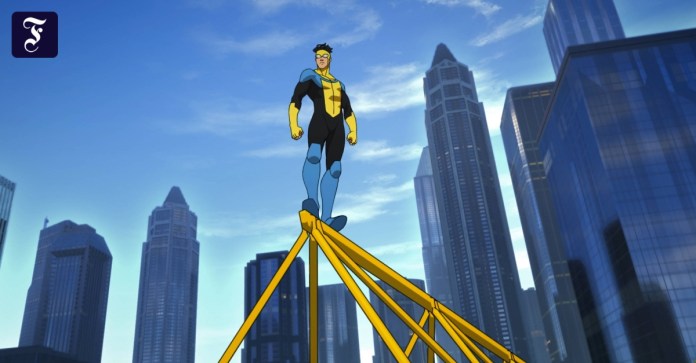 EFor a moment it feels like a Saturday morning in the 90s when parents were able to turn around in bed while the children were being entertained by cartoon marathons on various private channels. Batman & Robin, the Turtles, Superman, the X-Men, Ghostbusters and many other heroes outdid each other on the early slots with the world salvation. Visually, “Invincible” ranks right here, and narrative seems to be more of a target group, albeit in an extravagant forty minutes per episode instead of the usual 20 to 25.

A first indication that things could be more dramatic here than expected. The series first tells how the eponymous hero comes to his abilities. While most superheroes are surprised by their superhuman powers, their lives completely change from one day to the next after an animal bite, an accident in the laboratory or an unknown genetic disposition, here it is the other way around. Mark Grayson (voiced by Steven Yeun) has been waiting for something to happen since he was seven. His father is an alien sent to earth to protect its inhabitants from harm and it is certain that offspring will inherit the alien characteristics of their parents. Nolan Grayson (JK Simmons) can fly, is super powerful, super fast and super resistant, an almost boring standard repertoire for a hero, but effective. Every day Mark sees on the news how his father works as an “omni-man” for the world before dinner flies in on time. The earthly mother Debbie has got used to the advantages and disadvantages of the super partner life, but she would rather see her son in jeans than in a skin-tight suit.

A name would make the choice easier

But after ten long years of waiting, the time has come: “This is what everyone wants. Something heroic – with expressiveness, ”whispers the wise tailor (Mark Hamill) when the Graysons stand in his secret shop and Mark is asked to choose an outfit. A name would make the choice easier, and after a fateful conversation, the teenager decides on “Invincible”, even if it soon turns out that it is by no means as “invulnerable” as the title suggests.

Invincible still has a long journey ahead of it: The comic book of the same name came to an end in 2018 after 15 years, it comes from Robert Kirkman, who has long made a name for himself in the television landscape with the series for his “The Walking Dead” comics. At first glance, these two adaptations couldn’t be more different. One is filmed in real life, pessimistic and brutal, the other animated, relaxed, edifying. But then the first 35 minutes of the pilot episode are over, and suddenly a turn takes place that gives hope that no children with access to the parental streaming offers have let themselves be tempted by the brightly colored optics to switch on. Because suddenly the color red dominates, and it becomes clear why the series is only released from the age of eighteen.

Abysses are opening up in this world populated by a horde of superheroes who are literally fighting over who is allowed to protect the earth as a member of the most popular teams. Demon detective Damien Darkblood emerges from one of these abysses, including a writing pad, trench coat and slouch hat, who is now supposed to determine how the violent incident came about and what Marc’s family has to do with it. Darkblood follows similarly grotesque new characters. In a rigorous liberation strike, Kirkman gets rid of the legacy of famous cult figures such as Batman, The Flash or Wonder Woman and creates heroes who can do a lot, but not much more. Who have to live in a world in which their existence has become a matter of course and is afflicted with unfulfillable claims, in which every failure is documented and becomes a running gag on Instagram.

In a world like this, you have to be hardy, and to make that audible, Kirkman has assembled an impressive cast of experts on cynical snippets, including Sandra Oh, Seth Rogan, Gillian Jacobs and Zazie Beetz. It’s a risk, this “adult superhero series,” as Amazon, where the eight episodes of the first season are published, calls it. The apparent dissonance between the visual and narrative style is the attraction that will move the children of the nineties to tune in and give the series the chance to prove to them that it has something to tell about the present beyond the boundaries of the familiar. Maybe even something heroic – with expressiveness.

“FIT” days – spring should bring plants and handicrafts to Aschbach

In the new podcast “Archewell”: Is Harry now also shedding his...