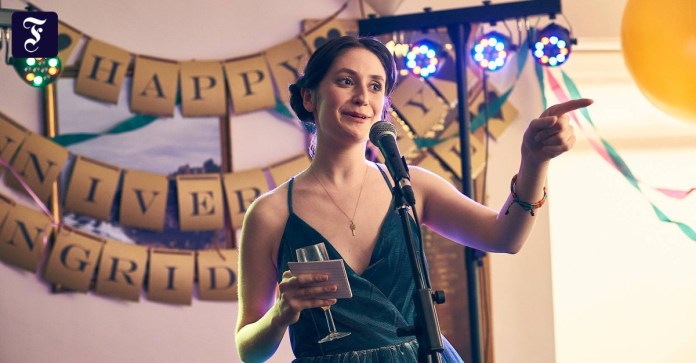 Ahen Marnie (Charly Clive) publicly thanks her father for his vasectomy, it might pass as a tasteless joke. Not exactly fitting to divulge highly personal details to the cheering couple in front of the celebratory community during the silver wedding speech, especially if they have no entertainment value. Embarrassing. The twenty-four-year-old unemployed woman, who lives with her parents in the Scottish town of Dunwick without any professional or life prospects, completely loses the thread when the images become independent in her head, the whole of society is peeled off before her eyes and young and old enjoy themselves lustfully. Shaking off is not possible. The obsessions take on a life of their own.

“It’s like” Sixth Sense “- only that I don’t see dead people, but naked people.” Not in aesthetically enhanced high-gloss porn pictures, but with turning-off extreme enlargements of intimate body details, which, like the desperate main character, you immediately see as a viewer wants to remove the head. Anyone who expects lustful sex scenes from the British series “Pure” will not watch any of the six episodes to the end. Instead, as a group portrait, she touches five more or less lonely, more or less achievement-oriented and insecure young people looking for ways to finally grow up and still stay with themselves. No one from the circle of casual acquaintances is as self-fixated as Marnie, whose obsessive-compulsive disorder, which is called “Pure” in English, has turned her whole life into a mess.

Everything gets mixed up in stressful and anxious situations

Her seizures are shown analogous to tourette outbreaks, only with obscene images instead of verbal attacks. In stressful and fearful situations, everything in Marnie’s head gets mixed up and explodes in scenes that are in the best case unsuitable and in the worst case demeaning for each and every one of those present. Like in the London Underground during a power failure, when the doors don’t open anymore and Marnie has a sex panic attack. Her new friendship with Joe (Anthony Welsh), who is pressed against her in the overcrowded tube, acts as a chaos intensifier. Or the interest in Amber (Niamh Algar), with whom Marnie tries to sleep in order to calm the imaginations of lesbian practices through reality. This attempt at self-therapy also ends with a state of emergency and injuries.

The sensible school friend Shereen (Kiran Sonia Sawar), with whom Marnie lives after the anniversary clat, would have confirmed this to her right away. If Marnie would talk about her condition. It gradually becomes clear that Shereen has her own life in a stranglehold rather than in control. One only believes in their self-discovery if one considers clinging to cat sweaters, animal documentaries and courses on self-care, therapeutic baking and the most meticulous house rules as signs of maturity. Charlie (Joe Cole) is the worst off. Marnie met him shortly after her escape to London in a self-help group for sex addicts. Charlie had a nervous breakdown a year ago, his love fell apart, the internship in finance is on hold. His compulsive masturbation prevents any real sex. Marnie gets that, his old and new boss also gets to feel it, who wants to seduce the intern and finally throws him out for “boring performance” – before she gives him tips on how to increase satisfaction.

The miniseries “Pure”, at first glance a very witty written and touchingly played mix of “Fleabag” and “Sex in the City”, is in depth a serious and truthful narrative about sex addiction and obsessive pornographic thoughts as symbols of insecurity in life. It aptly unfolds a state of reality in the mid-twenties, who, self-fixated and lonely, revolve around their neuroses and pathologies and struggle with affection and care for others. All go through life in their own way with their visors down, let themselves be exploited in unpaid internships like Marnie in the online magazine “Ethel”, sleep in broom closets and dream of the event that will make their lives more beautiful. They do not associate sex with fulfillment, but revelation and effort.

Author Rose Cartwright herself suffered from “Pure” and wrote about it under a pseudonym in the Guardian to arouse understanding for her obsessive-compulsive disorder. She worked on the script for the BBC series alongside Kirstie Swain. The staging by Anail Karia and Alicia MacDonald emphasizes the tragic-comic nature of the disease – and is ultimately a great, empathic celebration of friendship, human vulnerability and the freedom of – even painful – maladjustment. What if she had no more absurd thoughts, Marnie asks her therapist. Then she would be brain dead, is the answer. It remains difficult. And tolerable when you have a difficult time together.

The six episodes of Pure run today, 11.40 p.m., on ZDFneo. From Saturday they are in the ZDFmediathek.

Wind is replacing coal as the most important energy source in...

Coronavirus: Germany before another lockdown extension

Participation in the “hour of winter birds”