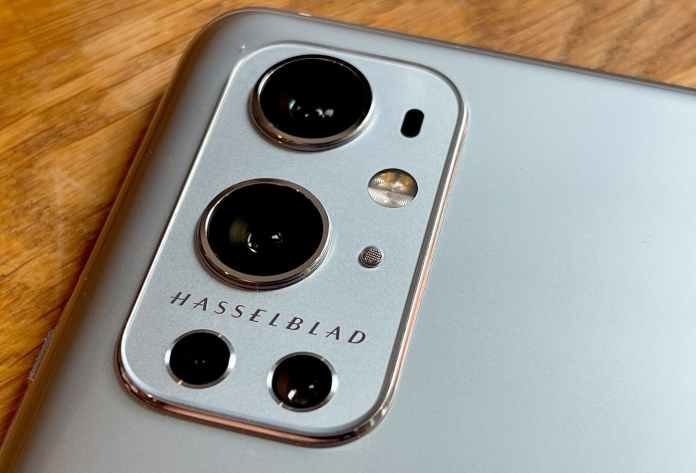 Smartphone manufacturer meets camera veteran – now also at Oneplus. But is the partnership with Hasselblad more than just a marketing game? A look at the new Oneplus 9 Pro.

The company, which has been part of the Chinese DJI Group since 2017, has made photo history. And now works with Oneplus on camera development. This becomes visible in the new Oneplus 9 and 9 Pro. The name “Hasselblad” adorns the camera module.

What works for Leica and Huawei or Nokia and Zeiss should also work for Oneplus: A smartphone manufacturer grabs the know-how and name of a photo veteran – and ideally benefits from it. According to the company, Hasselblad and Oneplus want to work together initially for three years. And the Oneplus 9 Pro is the first, still quite inconspicuous stage of this cooperation.

And especially in the software. More precisely with the color calibration of the IMX789 camera sensor developed with Sony. Hasselblad and Oneplus have jointly determined how colors are recorded, adjusted and played out for the Oneplus 9 and 9 Pro. The camera app also has the look of the newer Hasselblad cameras with an orange shutter release and the correct Hasselblad shutter release tone. «Snap!». All of this is chic and doesn’t hurt.

Discreet start of a cooperation

Later on, the cooperation will also include work on sensors and optics. The start of the cooperation is more subtle than rather unsuccessful earlier attempts. Remember the camera module with the Hasselblad shield for plugging into Motorola smartphones.

And how does that little bit of Hasselblad feel in Oneplus? Short and good. The 9 Pro’s camera starts up and focuses quickly, almost always triggers very quickly and delivers flawless images. It even captures difficult backlit and sky images in an appealing way. Purists may find the colors a touch too vivid.

Even the automatic mode delivers beautiful photos. If you want more, you can set many settings yourself in Pro mode and save and edit the photos as RAW files without loss. Portrait mode, macro and night photos as well as the tilt-shift effect offer further possibilities, artificial intelligence recognizes scenes and optimizes the cameras.

The 9 Pro films videos in up to 8K resolution at 30 frames per second and directly in HDR. The main and ultra wide-angle cameras can be used for this. The results in low light are impressive.

The quartet of main camera with 48 megapixels (MP), ultra wide angle (50 MP), telephoto (8 MP) and monochrome camera (2 MP) does not have to hide behind current sizes such as iPhone 12 Pro Max or Galaxy S21 Ultra. It is only inferior to the Samsung at a maximum of 3.3x zoom.

The Oxygen OS, based on Android 11, is pleasantly easy to use compared to many other Android systems and makes it easy for users to set up and operate their smartphone. There should be updates for the operating system for at least two years, security updates for at least three years.

The display is also pleasing in everyday life. The frame rate can vary from still images to up to 120 images per second – depending on the requirements from image processing to video games. The color reproduction covers a large part of the natural color space, the scrolling is extremely fluid. A sensor on the front and back of the device ensures the correct color display for each light.

Oneplus uses a technology called LTPO for the display: the QHD screen (3216 to 1440 pixels) should suck up to 50 percent less power from the battery. Which leads to the only small weakness of the 9 Pro – the battery. If you turn on all the fancy comfort functions, the energy level drops quite rapidly despite the 4500 mAh capacity. The Oneplus solution, on the other hand, is called Warp Charge 65.

The large 65-watt power pack charges the battery to 75 percent within 20 minutes and is fully charged in just under 30 minutes. Charging is also done wirelessly at high speed: with an optional warp charge station, it takes 43 minutes to fully charge the battery. The trick: there are two batteries in the device that are charged in parallel. Twelve temperature sensors monitor the charging process so that it doesn’t get too hot.

Conclusion: Almost 1000 francs are a lot of money for a smartphone – but there is also a lot in the 9 Pro. It looks chic, has the latest technology and good software on board, and an interesting camera package. Whether it’s Hasselblad or not: The camera is really fun and gives hope for further results from this partnership. The Oneplus 9 Pro will be available from March 31 with 128 GB of storage for 979 francs, 256 GB for 1079 francs.

Coronavirus: Publications by companies (January 2021) – From the official gazette

BVB away in the summer? Chelsea allegedly wants Erling Haaland...