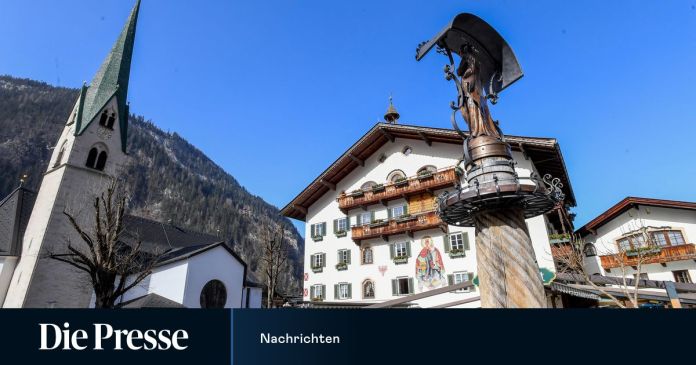 In order to “wipe out” the South African coronavirus mutant, the Tyrolean district of Schwaz is vaccinated. The state receives 100,000 additional vaccination doses. Furthermore, an exit test is mandatory.

An exit test is required for the Tyrolean district of Schwaz, in which the South African mutant of the coronavirus is particularly widespread – all of its residents are also to be vaccinated. Federal Chancellor Sebastian Kurz (ÖVP), Health Minister Rudolf Anschober (Greens), Tyrolean Governor Günther Platter (ÖVP) and Deputy Governor Ingrid Felipe (Greens) announced on Wednesday. The vaccination should be scientifically accompanied and published in a study. The vaccination campaign should start in the second week of March.

One after the other: Chancellor Kurz started the media appointment with an overview of the Austria-wide corona situation: The seven-day incidence is currently 160. That means: “We are still having increasing numbers of infections to an extent that was to be expected.” is therefore happy, according to the head of government, “that the population is making intensive use of the test facilities”. Austria is “one of the leading countries in Europe with over 2.5 million tests per week” when it comes to corona tests, and when it comes to corona vaccination, it is in seventh place in the EU.

Tomorrow he will travel to Israel and talk about cooperation in vaccine production. Because: It is to be expected that further mutants of the Sars-CoV-2 pathogen will appear, for which special active ingredients are needed. The British and South African variants of the virus are currently spreading in Austria. The latter in particular represents a danger “for the way back to normal”, since one of the available vaccines does not achieve the desired effect with this one.

This is a problem in Tyrol in particular. As is well known, the largest outbreak of the South African coronavirus mutant B.1.351 within the EU occurred in February, which is why everyone who wants to leave the state has had to be tested since then. This measure, which remains in place, has shown initial success, said Kurz on Wednesday: The active cases have halved from 200 to around 80. Nevertheless, it is a matter of “extinguishing” the mutation, ie “reducing it to zero”. In order to achieve this, Tyrol is receiving 100,000 vaccines from Biontech / Pfizer for the particularly affected district of Schwaz in addition to its existing contingent. That was agreed with the EU Commission, said Kurz. The vaccine is to be offered to all those living in the Schwaz district who have already reached the age of 18.

“The state of Tyrol is particularly affected by this pandemic,” added Platter. The situation is particularly drastic in Schwaz, where vaccination coverage is to begin on March 13th – a commission is to carry out a study in parallel to scientifically document the steps. The second dose will follow after two weeks. In addition, a test is imposed: “If you leave the district, you need a test,” emphasized Platter. It should start around March 10th. Felipe thanked them for “taking part in the tests” and appealed to the population of Schwaz to vaccinate at an early stage. In addition, she was convinced that “the establishment of this research region should and can be a place of learning for this great challenge”.

Anchober spoke of a “pandemic within a pandemic”. The reason for this is the spread of the named mutants, above all of B.1.1.7, i.e. the British variant. He identified a “first partial success” in the fact that the spread of the South African variant was slowed down in Tyrol. But: “We are not yet where we want to be.” Therefore, it is good that there is now an additional vaccine – whereby: Other federal states would not be disadvantaged, emphasized the Minister of Health.

Similarly, the head of the vaccination department of the Ministry of Health, Maria Paulke-Korinek: The “extremely important study” in Schwaz will bring a lot of data on the effectiveness of the vaccine.

Cassandra Steen is getting a divorce

Migration towards the USA – Mexico deploys troops on the southern...

Althaus resigns from task force – “Politicians must finally learn to...

Corona in MK: Hope on Monday – Lowest value since mid-October