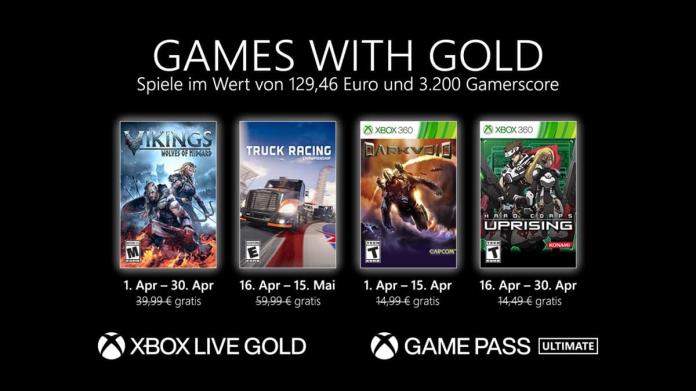 Microsoft today announced the first games that will be available to Game Pass users for free for a certain period of time as part of the “Games with Gold” campaign.

Fight mythical beasts in Vikings: Wolves of Midgard on Xbox One and Xbox Series X | S and drive heavy trucks to victory in Truck Racing Championship.

In the classic lineup about backward compatibility (read: Xbox 360) you fight on land or in the air in Dark Void and play the spiritual successor to Contra in the shooter game Hard Corps: Uprising.

Xbox Live Gold members have exclusive access to these games for a limited time as part of Games with Gold. This also applies to Xbox Game Pass Ultimate members, who receive all the benefits of Gold plus access to over 100 games with the Xbox Game Pass.

Truck Racing Championship is available from April 16 to May 15 on Xbox Series X | S and Xbox One.

Vikings: Wolves of Midgard will be available April 1-30 on Xbox Series X | S and Xbox One.

Everything you need to know about the Games with Gold program can be found here. As a member of the Xbox Game Pass Ultimate, users can also enjoy all the benefits of an Xbox Live Gold membership – including the monthly Games with Gold – and they also have access to over 100 titles for console, PC and Android with cloud gaming (beta) as well as EA Play on console at no additional cost.

Elena Miras is forgotten – Mike Heiter now also has a...