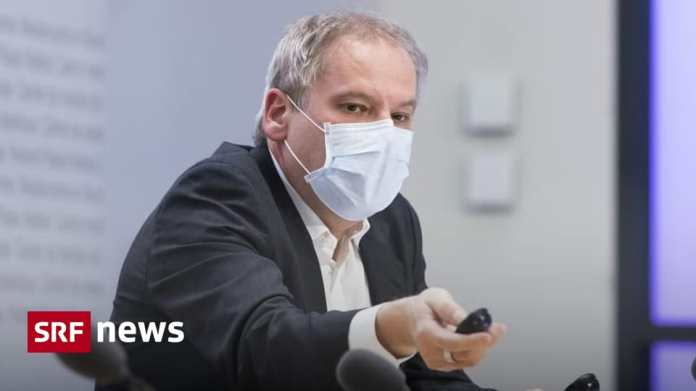 Increasing number of cases – mutations dominate: The trend of increasing case numbers has continued since February. “It can be assumed that the number of cases will double in less than three weeks. All cantons have a reproduction number of over 1, ”said Mathys.

The increase in cases among younger people will increasingly shift to older people. Accordingly, there is a risk that the pressure on the hospitals will rise again.

Nine out of ten infections are due to the British variant. The variant from South Africa has so far been detected 200 times in Switzerland, and the Brazilian variant has been detected in 7 cases.

In principle, there should be a certificate as soon as possible. “We are working flat out to ensure that this Covid-19 certificate is available by the summer,” said Patrick Mathys, Head of the Crisis Management and International Cooperation Section at the FOPH.

The BAG is currently examining various technical solutions that are best feasible for Switzerland and that would at the same time be internationally accepted.

Pharmacies prepare for self-test dispensing: The pharmacies can use the health insurance card to see whether a person has already drawn their monthly ration of five free self-tests. People are also informed that they only have five free trials a month to benefit from.

“We hope that people will show solidarity,” said Martine Ruggli, President of the Swiss Pharmacists’ Association Pharmasuisse, in front of the media in Bern on Tuesday. “We can use the health insurance card to see whether a person has already drawn their ration.”

How to deal with the Brazilian mutation: The interruption of flight connections to Brazil is currently not an issue for Switzerland. However, if the neighboring European countries decide to take measures, Switzerland would join, as Patrick Mathys explained.

He emphasized that the situation should be monitored very carefully. The Brazilian health system is on the verge of collapse.

So far, however, only seven cases of the Brazilian virus variant have been found in Switzerland. However, if this variant spreads further, measures will be considered.

Lifelong for failed IS attacks on ICE trains

What you need to know about the Covid vaccination

Lose weight: test shows this is the best app for weight...