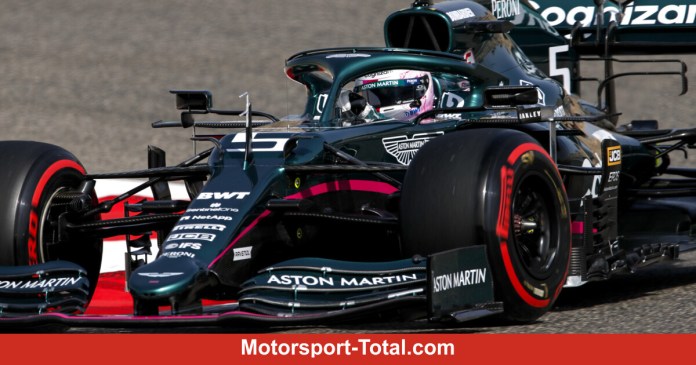 (Motorsport-Total.com) – Sebastian Vettel finishes the first day of training with Aston Martin in 14th overall. The Heppenheimer set his personal best in the second free practice session in Bahrain in 1: 31.769 minutes (0.922 seconds behind). In total, he did 47 laps without any problems in the two hours of training. “Every lap is still good for me,” he smiled afterwards in the Sky interview.

The German started the first official session of the season opener well behind, as he lost a lot of time in the same place during the three-day test two weeks ago due to technical difficulties. Vettel reeled off the fewest test kilometers.

He came to the Bahrain race weekend with a “100 lap deficit”, so the smooth start of the training session was pleasing. “It’s still the case that every lap is good for me. There are still a few things that I still have to get used to, but with every lap, with every set of tires, it gets better.”

The shortened training time – a total of one hour less than in previous years – did not suit him, and the conditions have changed significantly from the hot morning to the cooler evening with sometimes strong gusts of wind. Nevertheless, the 47 laps helped, emphasizes Vettel.

Because the 33-year-old is still getting used to his new team. He still has to get used to “braking and steering” and how the AMR21 “wants to be driven”. In the long run, he still misses consistency, he admits in the ‘Sky’ interview (AD: Get the complete Formula 1 and the best live sport with Sky Q or stream flexibly with Sky Ticket. Without a receiver.).

There he still sees “potential for improvement”. In general, he still tries a lot – “Sometimes it works, sometimes it doesn’t. But even then, I think things will go much better in the race. You then have more time, then you can get into the rhythm more easily,” he remains optimistic .

Looking ahead to Saturday’s qualifying, he is confident that Aston Martin should be able to “take another step”. “I have the feeling that there is still a lot on the table,” adds Vettel. Above all, there is still a lot of room for improvement, as he has to get to know the car even better and “squeeze it to the limit”.

“At the moment it still looks a bit mixed. Sometimes I’m really good, in other corners I’m far away. But that’s normal.” A look at the sector times reveals: Vettel can keep up with teammate Lance Stroll in the first and third sectors and drive exactly the same times to a thousandth of a second.

Only in the second sector, which is much more curvy, does he lose almost four tenths to the Canadian. On Friday, Stroll finished eighth in the overall standings with one lap in 1: 31.393 minutes (+0.546 seconds).

First vaccination administered in a retirement home in Hesse

Armin Laschet calls for no Christmas gifts to be bought online

Gross’ commitment to Schalke 04 – found: trainers with charisma and...

Criticism is loud: Is Switzerland going to lose the one-dose vaccination...

Union and SPD for taxation of online trade to support city...