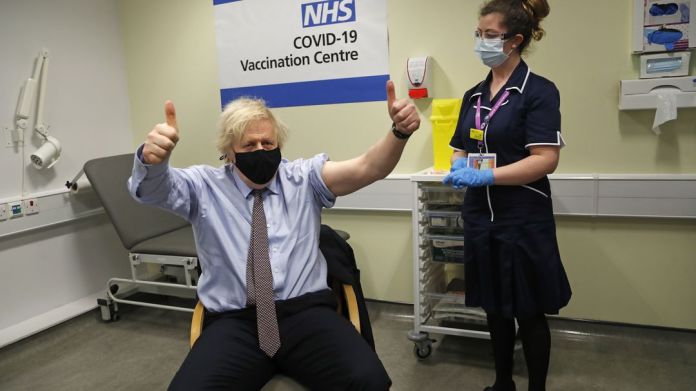 London. The hymn of praise became so loud that the British almost rolled their eyes when they were presented with Germany as a prime example.

While the UK government got lost in a zigzag and was too hesitant to take action, making the kingdom one of the worst-hit countries in Europe both in terms of Covid deaths and economically, last year ran in the Federal Republic everything better.

And so many longed for a strong leadership figure when Chancellor Angela Merkel was on the island. “How Germany got it right, while Great Britain got it wrong”, wrote the “Telegraph” and thus of all the Eurosceptic newspaper that traditionally mainly attacks the continent.

In the meantime nobody envies the Federal Republic any more. Instead, many British people are shaking their heads blankly at the chaos surrounding the distribution of vaccines, the bureaucracy and the recent Astrazeneca vaccination ban. On the other hand, the program is running with great success on the island. Almost 55 percent of the adult population have already received their first vaccination.

The media, politicians and commentators cannot often enough present those graphics that show the vaccination progress of the British in comparison to other European countries. “We don’t envy you”, the headline of the tabloid “The Sun” recently said, referring to the “only German word most Britons know: Schadenfreude”.

The article was full of malice, including allusions to the legendary towel contest between British and German hotel vacationers. Brexit supporters see the problems on the continent as the final proof why the exit from the EU was the best decision for the kingdom.

Meanwhile, Merkel’s latest Easter U-turn reminded observers of Prime Minister Boris Johnson, who had to take a lot of criticism last year for numerous U-turns and broken promises. He is now acting more cautiously – and benefiting politically from the vaccination campaign.

The days of confusing messages from Downing Street are also over. There has been a strict lockdown for almost three months, including a travel ban and “stay at home” rule. That will only change with hesitant opening steps in the next few weeks. On June 21, the government wants to lift all corona rules – and enable a return to normal life.

Four apartments alone – what is personal use?

Rising oil prices: gasoline as expensive as it was before the...

Cathy Hummels without pants on the road – fans confused: “Something’s...

Finally: Yasin and Samira have their wedding date fixed