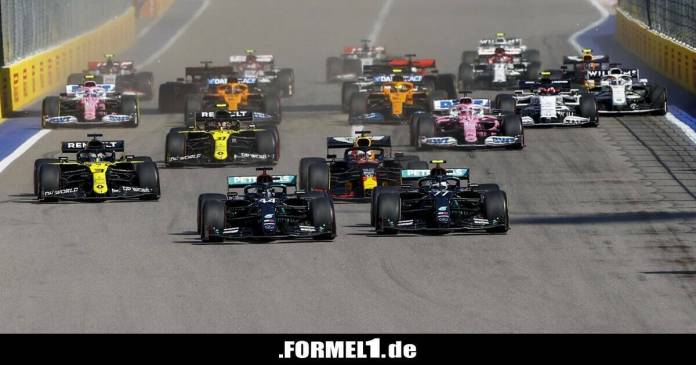 (Motorsport-Total.com) – For the first time since 2012, the name Schumacher appears again in a Formula 1 entry list. But at the Grand Prix debut of world champion son Mick Schumacher, the German free TV broadcaster RTL is no longer there for the entire season. German-speaking motorsport fans can still see how well Schumacher and Sebastian Vettel are selling in the 2021 season.

RTL is out: Formula 1 in Germany can be seen exclusively on Sky in 2021

In this overview you will find all the essential details about the TV broadcast and the most important live streams. You will find out details about the schedule (as soon as available) and the options for following Formula 1 events via television, live ticker or live app. In short: We answer all the crucial questions about Formula 1 on TV for the 2021 season!

When will Formula 1 be at the 2021 Bahrain Grand Prix?

Which TV channels will show Formula 1 2021 live?
Formula 1 on TV in the 2021 season: Sky and partly RTL in Germany, ORF and ServusTV in Austria and SRF in Switzerland show Formula 1 live on German-language television.

Sky shows the entire Formula 1 season 2021 exclusively in Germany. As usual, all training sessions, qualifying and the race can be seen live. (AD: Get the complete Formula 1 and the best live sport with Sky Q or stream flexibly with Sky Ticket. Without a receiver.)

Commentator Sascha Roos will also guide the shows in 2021. Timo Glock (from 2021) and Ralf Schumacher, two former Formula 1 drivers, will alternately support him as experts to analyze what is happening. Shortly before the start of the season, Sky also won ex-champion Nico Rosberg for its reporting. Peter Hardenacke moderates the Formula 1 broadcasts on Sky, Sandra Baumgartner catches votes on site.

What Sky also has on TV: the advance press conferences for drivers and team bosses, plus the top 3 press conferences after qualifying and the race. There are also 25 episodes of the new technology magazine “GP Confidential”. And: Thanks to the close cooperation with “Sky Sports F1” in England and “Sky Italia” in Italy, German motorsport fans are offered additional content on Sky.

What’s new: Sky also shows the preliminary reports for the race on Sunday on free TV. With the program “Race Compact”, the broadcaster will also provide a half-hour summary of the Grand Prix and on Monday after the race it will post a half-hour analysis with a discussion, moderated by Noah Pudelko.

In addition to the Formula 1 program, Sky shows all units of Formula 2, Formula 3 and the races of the Porsche Supercup live.

The new channel “Sky Sport F1” can be received with a Sky subscription as part of the sports package for 17.50 euros per month. For five euros extra, Sky also delivers UHD quality for all Formula 1 races and “most of the qualifying”.

RTL had initially let its TV contract for the premier class of motorsport expire after almost 30 years and no longer wanted to broadcast Formula 1 from 2021. But then the private broadcaster secured a sub-license from Sky for four races and can therefore offer Formula 1 coverage again in 2021, live and exclusively on free TV in Germany. The new agreement with Sky covers the Formula 1 seasons 2021 and 2022.

Whoever stands in front of the camera for RTL and sits behind the microphones has not yet been officially confirmed by the broadcaster. Most recently, Florian König was the moderator for the programs, Kai Ebel was a pit lane reporter. The live commentary came from Heiko Waßer and the former Formula 1 driver Christian Danner.

In Austria, ORF and ServusTV will share the broadcasting of Formula 1 races from 2021 and up to and including 2023. The exact division of the races was announced in mid-February. Both channels will show twelve races each. There is one exception: the Austrian Grand Prix at the Red Bull Ring in Spielberg will be shown for Austrian fans on ServusTV and ORF at the same time on TV.

The well-rehearsed duo consisting of Ernst Hausleitner and the former Formula 1 driver Alexander Wurz will also be commenting on ORF in the 2021 Formula 1 season. They usually start reporting for the second free practice on Friday, each time live.

The “Formula 1 Motorhome” format is new, in which the duo will recapitulate the events on all 23 Sundays. Hausleitner and Wurz get support from four experts: racing team owner Robert Lechner, ex-DTM driver Ferdinand Habsburg and the two Austrian racing drivers Corinna Kamper and Bianca Steiner.

At ServusTV, the former Sky presenter Tanja Bauer was entrusted with building up the Formula 1 TV team. In contrast to the past, however, she is no longer in front of the camera herself, but is the editor-in-chief. Andrea Schlager, who previously worked for ServusTV in the MotoGP motorcycle world championship, will moderate the Formula 1 programs. Christian Klien is the last Austrian to date to support her in Formula 1 as an expert.

The Formula 1 units are commented on on ServusTV by Andreas Gröbl. He forms a duo with Nico Hülkenberg from Germany. Hülkenberg, who last competed in Formula 1 races in 2020, is starting as a co-commentator and expert for the first time. In the Friday training, ServusTV can also fall back on the expertise of Philipp Eng. The Austrian now drives sports cars, but used to test in Formula 1 as well.

In Switzerland, the long-time Formula 1 commentator Michael Stäuble and, for the first time, Michael Weinmann took turns in the live coverage of SRF in 2020. Former Formula 1 driver Marc Surer also appeared as an expert in selected races. It is still unclear whether this list will remain in place for 2021.

Swiss television usually only broadcasts qualifying and races live, and that until at least (and including) 2022.

What are the live TV times for the 2021 Bahrain Grand Prix?

What are the TV times for repetitions for the 2021 Bahrain Grand Prix?

The program scope of the F1 TV Pro subscription includes all Formula 1 units as well as the Formula 2, Formula 3 and Porsche Supercup series, each live and on demand, as well as an archive with historical Formula 1 Grand Prix.

But be careful: In Germany, it is no longer possible to take out a new subscription for F1 TV Pro due to the exclusive rights of Sky. Only existing F1-TV-Pro customers will be able to access the content of the streaming service from 2021, Sky reports.

With F1 TV Access for 26.99 euros per year, fans have access to repeats and the archive, but not to live content from Formula 1 and its supporting series.

What if I don’t have access to TV or live streams?
If you don’t have Sky, ORF, ServusTV or a subscription to the F1 streaming service, then you are in the best of hands on our portal! We offer motorsport fans during the Formula 1 season from morning to evening an extensive Formula 1 news live ticker, in the style of a radio program. In this we report live during test drives and on the race weekend about all activities on and off the racetrack.

There are also the Formula 1 session live ticker. It’s also available in our mobile Formula 1 apps, ideal for the “second screen” on a tablet or smartphone.

When and where will Formula 1 take its winter test drives in 2021?
In this overview we have stored all the important information about the Formula 1 winter tests 2021, including dates and venues. As soon as available, the individual daily and overall results with statistics can be called up under this link.

What changes are there for the 2021 Formula 1 season?
We have compiled all driver changes before the Formula 1 season 2021 in this overview. You can find details about the technical changes here.

Where can I find the results for the 2021 Formula 1 season?
Our portal provides you with all the results, statistics and overall ratings for Formula 1 2021 under these links. You can also access the individual results of the winter test drives before the start of the season and later at the respective race weekend, as soon as they are available.

Formula 2, Formula 3 and Porsche Supercup are also represented at the Formula 1 racing weekend, but in the case of Formula 2 and Formula 3 no longer simultaneously, but alternately. Sky will also broadcast these series to the usual extent in the 2021 season.

Wuppertal: Carnival prince thrown out for nude photos – case in...

This is how the syringe phobia can be overcome – healing...

From 2022, Google does not want to carry out any tracking...

Coronavirus pandemic: ++ Wages in Germany are falling for the first...

Biden’s Christmas message: “The darkest days in the fight against Corona...