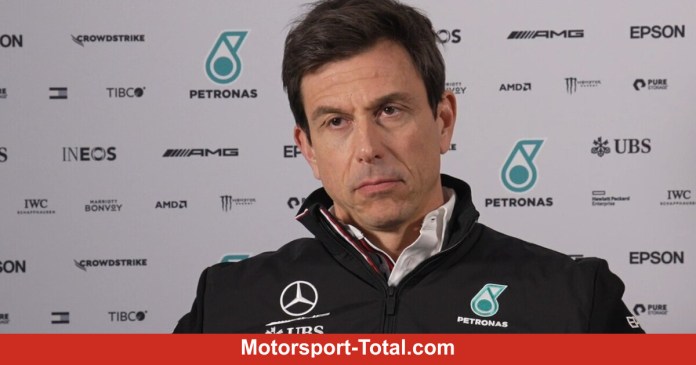 (Motorsport-Total.com) – Lewis Hamilton plans “not too far into the future” at the beginning of the 2021 season and admits that his main drive is not just the next world title for a long time. “We are currently living in a very unusual time. So I just wanted to extend it by a year,” he says of his future in Formula 1.

Toto Wolff (still?) Keeps the ball flat when it comes to Max Verstappen

Then one spontaneously thinks of Christian Horner, who is convinced that Toto Wolff would prefer to bring Max Verstappen to Mercedes if Hamilton abdicated as eight-time world champion at the end of 2021 – an opinion that the Red Bull team boss by no means exclusively represents in insider circles.

But at least at the moment Wolff is trying to keep the ball flat: “Max,” he says on the sidelines of the presentation of the new Mercedes F1 W12, “is certainly an extraordinary young driver who will be on everyone’s radar screen in the future. But we don’t flirt outside as long as we haven’t found a clear understanding with our two drivers. “

This is not a permanent no to Verstappen, but at least a temporary commitment to Hamilton. “If Lewis continues, we will do it together,” emphasizes Wolff. “We have had such great successes in the past and we have such a trusting relationship that we will of course talk to him first of all about 2022.”

Hamilton: Different priorities than 15 years ago

Anyone who listens to Hamilton shortly before the start of the season no longer hears the 22-year-old youngster, for whom there is nothing greater than Grand Prix victories and world championships. At the age of 36, Sir Lewis talks a lot about anti-racism, diversity and inclusion – and less about how much he still wants to win or how things should continue in the racing cockpit after 2021.

Mercedes launch: is Hamilton still in the mood?

Lewis Hamilton’s statements at the presentation of the W12 were the big topic – world titles, he says, are no longer the most important thing More Formula 1 videos

“I made a conscious decision to only make a one-year contract,” he explains. “So I can see how the year is going and where we are at halftime or towards the end of the season. Who knows if we will still be in a pandemic?” But he makes it clear: “That does not mean that I am no longer fully committed. I am very much.”

An attitude that Wolff can understand: “He is right. Times are changing. We are all setting our priorities anew – keyword how we live, keyword health. He supports his initiatives against racism and inequality with great passion. And then we have too still this big rule change for 2022 – even if I believe that it doesn’t matter to him. “

“But I can understand and understand that a driver who has won seven world championships wants to maintain the flexibility of how he would like to shape his future. Whether that has to do with racing or with things outside of our circus.” says the Austrian.

One thing is clear for Wolff: The decision will not be made this time as long as it was after the end of the 2020 season. And: “I think that there is a good chance that Lewis would like to continue. Because he enjoys driving and he is embedded in the team and this motivation still prevails.”

“But that can of course also change during the season. He just wants to keep this flexibility. Nevertheless, we decided that we should start talking to each other relatively early – very soon, to find out what we mutually expect from the future. He on the one hand and we as a team on the other, “says Wolff.

Doctors not only warn against the iPhone – other cell phones...

Airport expects an upswing in summer