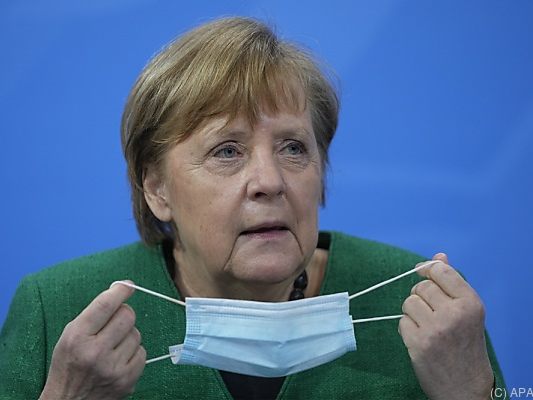 
“We have not yet been able to defeat the virus,” said Merkel
© WHAT (dpa)

In view of the rising number of corona infections, Germany will go into the sharpest lockdown since the pandemic began a year ago. From April 1st up to and including April 5th, public, economic and private life is to be shut down sharply. The German Chancellor Angela Merkel (CDU) and the Prime Ministers of the federal states decided on Tuesday night. The lockdown will be extended until April 18th.

Maundy Thursday and Holy Saturday are defined once as rest days and associated with extensive contact restrictions. “The principle WirBleibenZuHause applies for five consecutive days,” says the decision paper. According to this, the food trade in the narrower sense should only remain open on Holy Saturday. Private get-togethers should be limited to one’s own household and one other household, but no more than five people. Children up to 14 years are not counted. Couples are considered to be one household.

According to the decision, gatherings in public spaces are generally prohibited during this period. Where outdoor catering is already open, it has to be closed again for these five days. Churches and religious communities are asked to only make online offers for believers at Easter. Only vaccination and test centers should remain open.

“We have not yet been able to defeat the virus, it is not giving up,” said Merkel after the deliberations. Germany is in a very serious situation with exponentially increasing numbers of cases, increasing stress on intensive care units in clinics and the spread of more contagious coronavirus variants.

Bavaria’s Prime Minister Markus Söder (CSU) described the resolutions as a “difficult birth”, but in which a “clear line” was found. “The caution team prevailed overall, with everyone,” emphasized the CSU boss. “We know that Corona is heavy as lead over the country.” It is now up to you to make the third wave shorter.

This was preceded by the most difficult round of negotiations by Germany’s Chancellor and state leaders since the outbreak of the pandemic. Negotiations lasted more than eleven hours – but because of a dispute over so-called “low-contact vacation” in their own state, the big round was interrupted for hours.

In view of the exponential growth in infections, it was also decided that the emergency brake agreed at the beginning of March must be implemented consistently. From a seven-day incidence of more than 100 new infections per 100,000 inhabitants, the districts should implement further steps. Possible options include exit restrictions, stricter contact restrictions or the obligation to perform daily quick tests in areas in which it is difficult to keep your distance or consistently wear a mask.

“We are in a race with vaccination,” said the German Chancellor. And the lower the number of new infections, the faster vaccinations could have an effect on the overall situation. It is therefore important, among other things, to apply the “emergency brake” agreed by the federal and state governments in particularly affected regions. The goal remains that there is no overload of the health system.

For German holidaymakers abroad, an amendment to the Infection Protection Act is to introduce a general obligation to test before the return flight. It should be made a prerequisite for entering Germany. Even now, travelers who come from “high-incidence areas” with a particularly high number of infections and areas with new virus variants must show a negative test from departure.

Instead of quarantine: someone with Covid 19 drives drunk at night...

Winter tourism only got off to a weak start due to...

Annual charts: AC / DC with album of the year, “Blinding...

Reconstruction of the main line: waiting for the decision