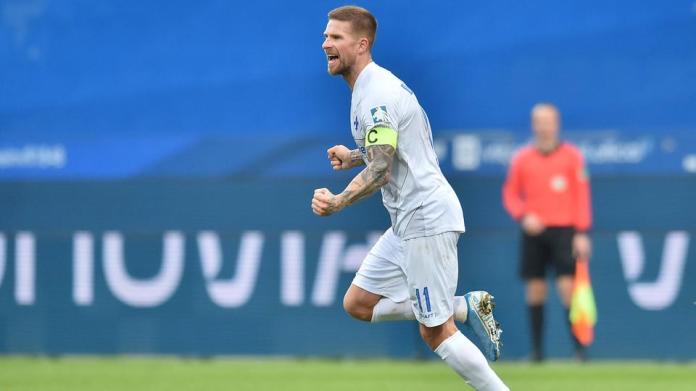 Tobias Kempe is the face of Darmstadt 98 after a total of almost six years. The 31-year-old does not rule out an end to his career with the South Hesse team.

The name Tobias Kempe is now very closely associated with Darmstadt 98. In 2015, his free-kick resulted in promotion to the 1st Bundesliga, since his return after a year at 1. FC Nürnberg, the now 31-year-old has been an undisputed top performer and crowd favorite since 2017 – a real face of the club.

Kempe with a declaration of love

And when it comes to Kempe, that won’t change that much in his career. “I don’t necessarily have to leave Darmstadt,” said the midfielder in a media round. He fully committed to the lilies, with whom he is still under contract until 2023: “In Germany I don’t want to play for any other club. I’ve found my love.”

They are frank words that rarely exist in this way in professional business. His brother Dennis Kempe now plays for Wehen Wiesbaden, so he lives nearby. Of course, he didn’t want to completely rule out whether Tobias Kempe would dare to go on another adventure: “You never know whether a job will come abroad.” However, this statement cannot be compared with the industry standard back door.

Kempe is also not one of the kind of professionals who let themselves be disturbed by a bank place for a short time and therefore go to a diving station or cause trouble. “It was a phase where I needed a break,” said Kempe, assessing the personal situation. He has consistently proven his worth for the team under coach Markus Anfang with eight goals and seven assists.

The team had scored seven points in the past three games with him as a substitute. The beginning therefore had no reason to change anything. Understandable for him, since it was about valuable counters, a slipping into the red table area could be avoided.

Memories of an emotional duel against Düsseldorf

It is still unclear whether Kempe will slip into the first team after the international break on Easter Sunday against Fortuna Düsseldorf. His name is associated with an important victory against this opponent. Almost exactly three years ago, the lilies had a key game in the relegation battle when they were able to defeat the then championship leaders and later promoted 1-0. Goalscorer: Kempe!

He has given the followers some special and highly emotional moments in the past. The bond between Kempe and the fans is close, they are missing in this corona crisis: “It is currently not the case that you can give us the charisma and power in the stadium – unfortunately.”

Kempe misses the fans – and not just their own

For example, it was a nice action that the fans last gave the players T-shirts and showed that they think of the team: “That was a great action that really gives us power. They stick with us and you can tell that they are there, although no one is allowed into the stadium. “

But the opposing support is also important for Kempe: “That’s why you became a professional footballer. To be whistled by opposing fans in front of a sold out house when you hit a corner – that’s missing.” Of course, you have to accept the situation in the midst of the pandemic. But the hope of a speedy return of the fans to the stadiums lives on with everyone involved.

Reporters Without Borders wants Assange to be released immediately – Politics...

Annual review: the sayings of 2020