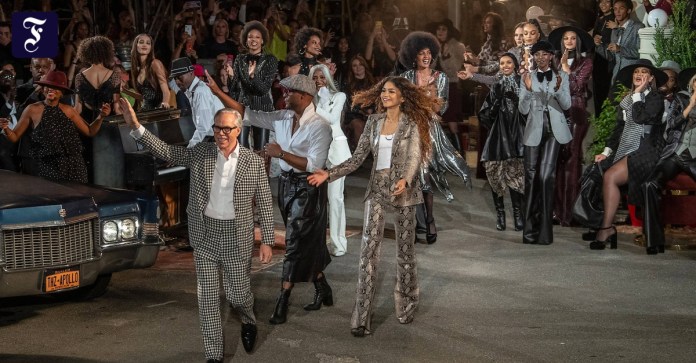 When Tommy Hilfiger swings to the left in his leather swivel chair in the office and looks over the roofs, he sees the Statue of Liberty in the distance. And when the light haze over the Hudson swallows the symbol of freedom, then it simply looks at the neighboring building of this warehouse on the west side of Manhattan 26th Street. Because the American flag proudly flies on the roof.

Responsible editor for the section “Germany and the World” and the Frankfurter Allgemeine Magazin.

As direct and open as this man is, his suggestions are direct and undisguised: America! Red! White! Blue! Add to this the fine “preppy style” from the preparatory schools, outdoor borrowings, sport style, relaxed lifestyle – and you have the recipe for one of the most successful design careers. His ingenious marketing talent also made Tommy, as he can only be called, an “All-American designer” who, like no other fashion designer, translates the American way of life into clothing.

It is, of course, an immigrant story. Thomas Jacob Hilfiger was born on March 24, 1951 to a mother with Irish-Scottish roots and a father with ancestors from German-speaking Switzerland. In his hometown of Elmira, New York State, Mark Twain once wrote the adventures of Tom Sawyer and Huckleberry Finn. It will not have been as carefree as Hilfiger’s childhood is today. Because with two parents who brought home very little money as a jewelry store clerk and nurse, and with eight siblings Tommy shared a Mark Twain first edition – and a house with only five bedrooms.

This man has always made a lot out of little. When he was nine he mowed lawn. At ten he was delivering newspapers. At 14, he was behind the counter at Pal’s Sporting Goods for $ 1.25 selling sports equipment. At 16 he was earning $ 2.50 an hour at the Hess gas station. He was enthusiastic about the gas station attendant uniforms with the big logo on the back and the design of the cars. At the gas station, the talented boy filled himself with marketing ideas: the clear Hilfiger logo and the large-scale colors and shapes would later make him world-famous. That took a long time, however.

“I never wanted to be poor again”

He survived the Ivy League look (chinos with a button-down shirt), made flower power (bell-bottoms, sandals, long hair), opened a shop (“People’s Place”) and soon had his own designs manufactured. When he was still in his early 30s, he jumped over the turnstiles on the New York subway because he lacked the dollar. But he stayed tuned. His drive: “I never wanted to be poor again.” His aesthetic theory: “It is fun, it is useful.”

Now he has billions, but has remained the nice guy who gets out of his private jet in flip-flops and from the Maybach in crinkle pants. When he smiles, and he often does, even his face creases.

New flight schedule from Zurich attracts with the Caribbean and the...

An extension of the Christmas holidays is considered likely

Oversight Board: Facebook committee presents the first six cases – and...

Liverpool coach Klopp after defeat: “Title race not my problem”

Comment on the demonstrations in Russia – This is about more...