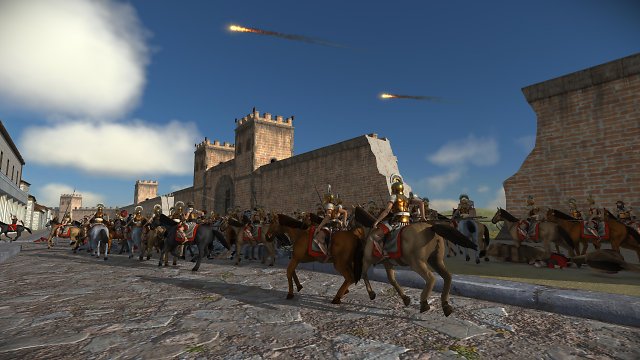 March 28, 2021 at 9:31 am
of Benjamin Gründken –
With Total War: Rome Remastered, Sega and Creative Assembly have announced a refurbished version of their 17-year-old strategy classic. The publication is due in April.

Sega and Creative Assembly have announced Total War: Rome Remastered. The new edition of the strategy game from 2004 will be released at the end of next month, on April 29, 2021 – with improved optics, additional factions and the extensions Alexander and Barbarian Invasion. Anyone who already owns the original game on Steam will receive a 50 percent discount until June 1, 2021.

For Total War: Rome Remastered, the developers are promising 4K optimizations, native UHD resolution and support for widescreen monitors. Buildings have also been redesigned and new environmental effects added, such as heat shimmer and clouds of dust. Creative Assembly has also opted for the campaign map, on which more details can now be seen thanks to the higher resolution.

Players also expect adjustments to the gameplay. So you should now be able to better control, zoom and rotate the camera. In the battles, the new tactical map provides information on unit status and area markings. Those familiar with the original can also look forward to heat maps and new symbol overlays for game mechanics such as diplomacy and security.

Cross-platform PVP multiplayer mode and original as an add-on

For the first time in the history of the Total War franchise, players can take advantage of a cross-platform PVP multiplayer mode on Windows, Mac OS and Linux. There are now 38 factions: 22 known and 16 originally unplayable. In addition, players can send dealer agents on missions. They are supposed to set up lucrative trade networks on the entire map, “buy out” rival traders and strengthen the economic power of the player realm.

Total War: Rome Remastered will be released on April 29th and includes the Alexander and Barbarin Invasion expansions as well as the original Rome: Total War (buy now ). The latter only works under Windows.

“The climb is absolutely deserved”

After interview: This is how the first conversation between Harry and...

Dynamo fighter Paul Will is injured!