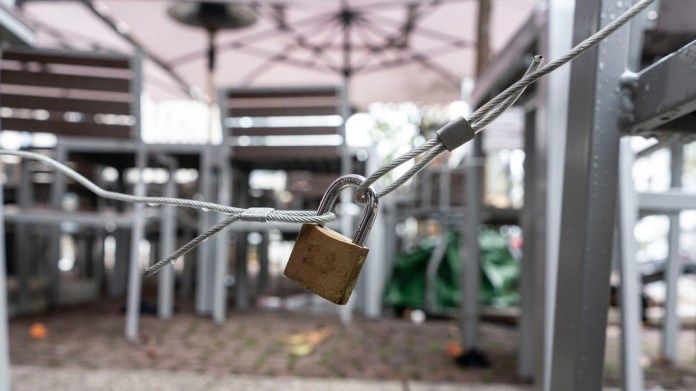 The tourism industry in Mecklenburg-Western Pomerania has been seriously disappointed by the results of the federal-state consultations on how to proceed in the corona pandemic. “It turned out to be the bad result that was hinted at: tourism at the end of the food chain and completely approximate,” said Tobias Woitendorf, managing director of the regional tourism association, criticizing the results. The resolution is not negotiable. Even after the most recent Corona summit, it remained unclear when hotels and guesthouses in the tourism region of Mecklenburg-Western Pomerania could receive visitors again. A possible opening at Easter will not be decided until the next video conference by the federal and state governments on March 22nd, as Prime Minister Manuela Schwesig (SPD) said early Thursday morning. This would mean that the hoteliers would have little time to prepare.

The lockdown will be extended until March 28th. In addition, a multi-stage opening plan was agreed, which provides for smaller opening steps beforehand. more

Woitendorf had already proposed a North German special route to tourism on Wednesday. As a consequence, together with Schleswig-Holstein – accompanied by scientific findings – an independent north German path in tourism could be embarked upon. The gastronomy also has to be patient. According to the decision paper, outdoor catering could at best not open until March 22nd. The prerequisite for this is less than 50 new corona infections per 100,000 inhabitants within seven days.

This regulation would not help the vast majority of businesses, said the president of the state association of business associations, Lars Schwarz, who also heads the hotel and restaurant association (Dehoga) in Mecklenburg-Western Pomerania. Schwarz described the situation for the hospitality industry after the federal-state consultations as sobering and disappointing. “A clear perspective has been postponed again,” he said. On the other hand, Schwarz was relieved with regard to retail. One could speak of a perspective there. However, he pointed out that many businesses are heavily dependent on tourists, but they are not allowed to come into the country for the time being.

As Schwesig announced after the federal-state summit, shops will be allowed to reopen for registered customers from March 8th. The number of authorized persons depends on the size of the shop. In regions with a seven-day incidence below 50, further openings are also possible without registrations. This already applies to the Hanseatic city of Rostock and the districts of Vorpommern-Rügen and Mecklenburg Lake District. Museums should also be allowed to reopen under certain conditions.

In circles with more than 100 corona infections per 100,000 inhabitants within a week, however, such easing could not exist, emphasized Schwesig. On Friday, the state parliament in Schwerin will debate the implementation of the federal-state agreements in another special session. Afterwards, after a video conference as part of the MV summit, the government and associations will update the state corona ordinance.

The lockdown is generally extended until March 28th. In the decision paper of the federal and state governments, however, loosening that goes beyond trade is recorded. From next Monday, a maximum of five people from two households will be able to meet. Children up to 14 years of age are not counted and couples are also considered to be one household if they do not live together. So far, a household has only been allowed to meet with one other person.

Final spurt on the way to the top of the town...

Paris Hilton turns 40: a glamorous life with many downsides

FBI on Biden swearing in: “We are concerned about the potential... Presentation of the AlphaTauri AT02 for 2021