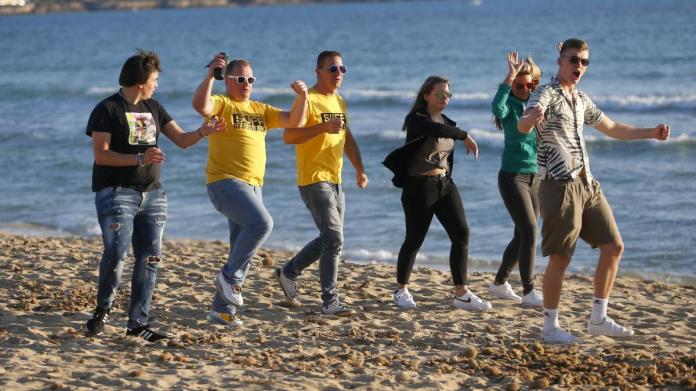 Federal government is examining the prevention of vacation trips abroad

According to the deputy government spokeswoman Ulrike Demmer, trips to popular holiday areas abroad, such as the favorite German island of Mallorca, could be temporarily prevented. There is a corresponding test order from the federal government.

Dhe federal government is examining whether trips to popular holiday areas abroad can be temporarily prevented due to the corona pandemic. “This is now being checked by the responsible departments,” said the deputy government spokeswoman Ulrike Demmer on Wednesday in Berlin.

The background to this is the temporary booking boom for Mallorca after the Germans’ favorite island was removed from the list of corona risk areas on March 14th. This also lifted the Federal Foreign Office’s travel warning. The move was made because the number of new infections there had fallen below 50 per 100,000 inhabitants within seven days.

This means that holidays in Mallorca are possible again without quarantine and without the obligation to test when you return. At the federal-state meeting on Monday, however, it was decided that in future a test requirement should be introduced for all air passengers entering Germany.

The test order now goes beyond that. Demmer did not give details of the test. A spokeswoman for the Federal Foreign Office said, however, that a worldwide travel warning like the one at the beginning of the pandemic last spring has not yet been planned.

Merkel against vacation in holiday apartments with exponential growth

Chancellor Angela Merkel (CDU) has reiterated her rejection of holidays, for example in holiday apartments or on campsites, during the exponential growth of corona infections. “Personally, I (…) believe that the very word of low-contact vacation could be a bit misleading,” she said on Wednesday in the government survey in the Bundestag.

The federal states of Schleswig-Holstein, Mecklenburg-Western Pomerania, Lower Saxony, Saxony-Anhalt and Rhineland-Palatinate had campaigned to enable low-contact holidays in their own country over Easter. However, your proposal failed in the federal-state negotiations on Monday.

Merkel said: “The fact that the families now spend their entire vacation without having contact with another family does not reveal itself to me at first glance.” That may be the case in individual cases. “Otherwise there are completely new constellations of contacts, namely people who have not known each other before come very close, and there is mobility within a federal state.” Given the current exponential growth of the corona cases, this would be “the wrong signal “, Said Merkel. With falling incidences, however, she could well imagine this.

The opening of outdoor restaurants is also not advisable in areas with values ​​over 100 new infections per 100,000 inhabitants and seven days, if one follows the assessments of the Robert Koch Institute. You have to keep an eye on the entirety of the movements towards and on the restaurant terraces and not just those at the table. In the case of lower incidences, however, the use by appointment (“Click & Meet”) is part of the existing opening concept.

“So something done”: Janni Kusmagk speaks of burnout