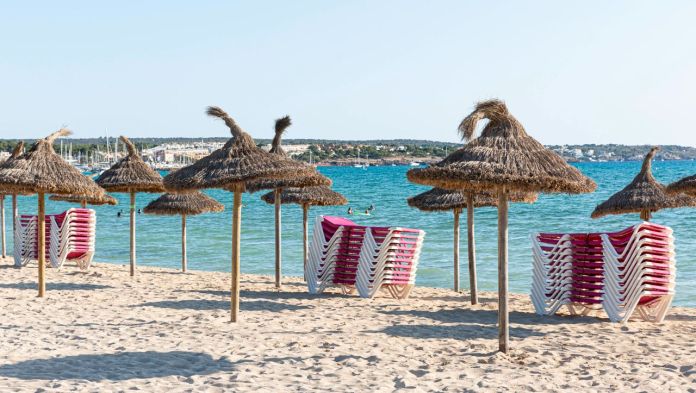 Many Germans associate Mallorca with the hope of sun, beach and sea – and of course partying. But also a responsible vacation? This is exactly what the travel company TUI is promising, which is planning to bring guests back to the Spanish holiday island as early as the Easter holidays.
“The hotel industry has prepared intensively to offer safe and responsible holidays,” said TUI Germany boss Marek Andryszak before the start of the online edition of the ITB travel fair. Precise hygiene concepts give confidence that there is close coordination with the authorities. Therefore, one wants to give customers “Easter vacation on Mallorca”, so the manager.

Most recently, Spain was classified as a risk area by the Robert Koch Institute – but without exceptionally high levels of new corona infections. TUI pointed out that the values ​​on Mallorca were »far below those of most of the German federal states«. On the island, the seven-day incidence has fallen below the threshold of 50, sometimes below 30, said Andryszak. He therefore hopes for further official signals such as an end to the travel warning, possibly later this week.

Some organizers are already planning around Easter. TUI canceled trips to the other Balearic islands of Ibiza, Menorca and Formentera as well as most of mainland Spain until mid-April. Now there should be a cautious opening, especially on Mallorca, for example with the start of a Robinson Club and the first flights of the group airline TUIfly from the second half of March.
The offer is to be expanded further in the summer. In terms of current bookings, Spain remains the largest market, it said – ahead of Greece, Turkey and Italy. Crete is currently in the greatest demand, but that could change, said Andryszak: “I hope that Mallorca will catch up with the Greek islands, maybe pass them.” April suspended – for Greece and Turkey, with the exception of Antalya. For destinations like Tunisia, Morocco or Egypt, customers will probably have to wait until at least the end of April.
Andryszak assumes that many holidaymakers will also spend their holidays in Germany again: “The trend towards holidays in their own country will continue.” The Baltic Sea coast and East Frisian islands as well as the Black Forest, Bavarian Forest and Allgäu are in demand. Should there soon be »reliable information« on further easing in Schleswig-Holstein, TUI will also expand its range there.

Removal of the quarantine obligation?

It is not yet entirely clear in which direction prices will develop this year. At least early bookers could get away cheaper because of the still underutilized capacities, it said. Viewed over the entire year, however, the average prices are likely to rise – also because many holidaymakers are willing to book higher-quality items.

Talks about reopening Mallorca were already going on behind the scenes. Other stakeholders outside of tourism are also putting pressure on politicians. For example, the real estate entrepreneur Lutz Minkner wrote to the German ambassador in Madrid. Because of the stable situation in the Balearic Islands, he demanded that the quarantine regulations in Germany for those returning from the islands should be “immediately lifted”.

According to Andryszak, the still low vaccination quota in Germany means that tests are “the most important mainstay for summer 2021” in tourism – “unless vaccination speeds up significantly”.

TUI CEO Fritz Joussen had also spoken out in favor of more corona rapid tests. The state and private donors are supporting the group with billions, and demand must now pick up noticeably in 2021. At the same time, TUI is pursuing tough austerity policies.

Editor’s note: In an earlier version it was said that Spain was a Corona high-risk area, in fact the Robert Koch Institute only classifies Spain as a risk area. We have changed the position accordingly.

Shortly before the final: These are the new “Love Island” couples!

The chances are currently best here

Ex-employee of the Queen now in prison