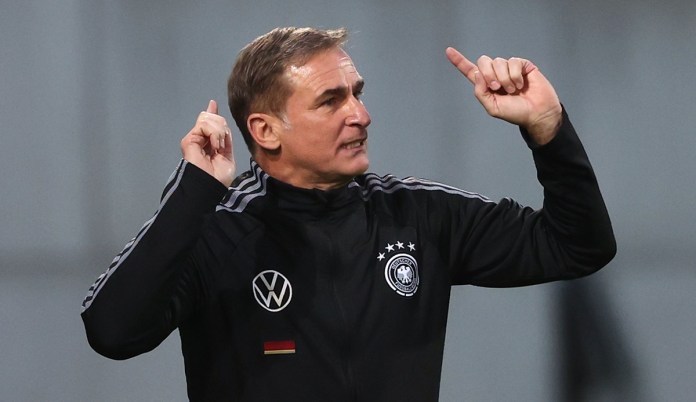 Germany’s first appearance at the U21 European Championship! The DFB youngsters want to take the first step towards the knockout phase against host Hungary today. At SPOX you can follow the game in the live ticker.

20. 20 minutes through, a committed start from Germany, but still lacks the first really clear chances to score.

18. The counterattack protection has been excellent with the Germans so far – not unimportant for the Magyars who are exclusively lurking on counterattacks.

17. Again, the ball comes across the Hungarian sixteen, this time starting from a Nmecha pass from the left, but it is not completed – the last pass is not yet!

14. Maier pulls twice on the right of the penalty area, taking German out of the game. Nmecha doesn’t get the flat and extremely hard ball on the first post, Mocsi is in between.

13. Burkhardt, now out of the way on the left side, lies in the middle to Dorsch, who immediately pulls off from 22 meters from a semi-left position – just past it to the left.

11. The Hungarians initially defend the free kick from the right. Burkhardt, who gets the second ball under control, lays out to Berisha, who is offside.

8. Dorsch in a duel at the level of the center line with Szendrei, who is checked away towards the substitute bench by the midfielder of the KAA Gent – bile duel!

6. The Hungarians defended this first and the subsequent second corner kick without any major problems.

4. First advance over the left side and space, the Fürth flank god of the 2nd division (13 assists strong this season). The Franconian cross clears Balogh to the first corner of the game.

3. The tactical direction of the Germans is already indicated in the first few minutes: Kuntz has given the team a clear 4-2-3-1, in which Nmecha acts as the sole leader, Berisha tends to occupy the position of the tenth.

U21 EM: Germany – Hungary today in the live ticker – before the start

The national anthems are just playing. Soon it will start.

Germany at the U21 European Championship: Moukoko struck

Moukoko will not be used today. As coach Kuntz confirmed before the game, the 16-year-old was hit. He is suffering from a “muscle injury” due to the bruise. But he is still an option for the tasks ahead.

In September 2017, both U21 teams played against each other – with the surprising winner Hungary. Back then, the Magyars won 2-1 in the Paderborn Benteler Arena. Johannes Eggestein from Bremen met for the German junior staff.

The coach of the Hungarian U21s is Zoltan Gera, 97 times Hungarian national player and best known for his time in England. The former central midfielder played over 200 competitive games for West Bromwich Albion and Fulham FC.

With Hungary, Germany will meet “a stranger” at the start of the tournament, according to Kuntz. Unknown especially because with captain Patrik Demjen as well as Szabolcs Schön, Zsombor Nagy and Zoltan Szilagyi, the even more well-known professionals are no longer in the squad. The four service providers tested positive for Corona shortly before the end of the reporting period.

Because all the professionals were still in action with their clubs last weekend, the U21 team had to start the tournament practically without any preparation. “We have to try to break everything that normally takes place in ten days into two days,” explains coach Stefan Kuntz.

An overview of the special mode of this U21 European Championship: The tournament will be held in Hungary and Slovenia, divided into two periods. The group phase takes place during this international break (until March 31), the knockout rounds with the first and second group players between the season finale of the national leagues and the start of the European Championship (May 31 to June 6).

The lineup of Germany is there. Stefan Kuntz surprised on the goalkeeping position. Leverkusen’s grill is only sitting on the bench, Dahmen from FSV Mainz 05 plays for him. Also in the Hungarian Szekesfehervar, but initially sitting on the bench, are some well-known faces from the Bundesliga: Schalke defender Thiaw, BVB-Juwel Moukoko and VfB -Attackers Klimowicz.

U21 EM: Germany vs. Hungary – The lineups

In the fight for group victory, Germany needs a victory against the hosts. With the Dutch selection, the team of trainer Stefan Kuntz got a tough chunk. The game against the Orange will take place next Saturday.

The DFB team will kick off in the MOL Arena Sosto in Szekesfehervar, Hungary. Spectators are not allowed.

Hello and welcome to the live ticker for Germany’s first game at the U21 European Championship. Opponent is host Hungary. The game will kick off at 9 p.m.

U21: Germany – Hungary live on TV and live stream today

Germany’s games at the U21 European Championship will all be broadcast on free TV. So also the game against Hungary on Wednesday.

Live pictures of the game will be delivered to you today ProSieben. The private broadcaster will go on air with its preliminary report at 8.15 p.m.

You can find a free live stream on ran.de. The stream starts around 8:10 p.m.

Germany in Group A: The game plan

This is the new voice of the BVG

“Are perpetrators of conviction”: Pensioner has to go to prison for...

Blocking of journalistic content – Facebook’s approach has also met with...

VW: The race to catch up towards Tesla continues ++ ProSieben:...

Fundamental decision for the inclusion of Olimpija Ljubljana, HC Pustertal &...

Germany too small for the rivalry