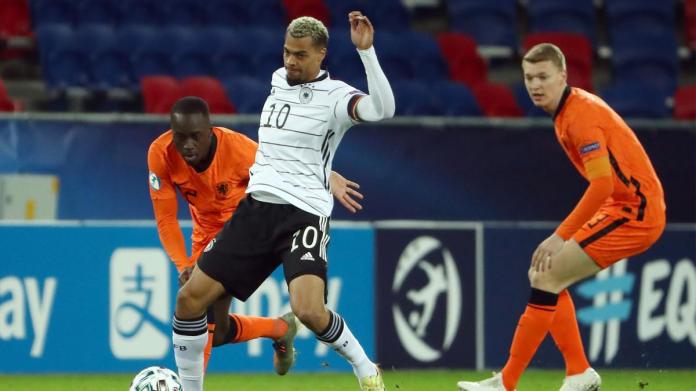 Trainer Stefan Kuntz surprised with a 3-4-2-1 basic order. But Germany only kept the playfully strong Dutch in check to a limited extent – Oranje had the greater chances. After a giant buck from Keeper Dahmen, Jong Elftal then also took the lead through Kluivert (47th).
It continues below the ad

The DFB team then showed morale and numerous substitutions brought new momentum. Ultimately, Germany fought for a point through Nmecha’s equalization (84th), which defends the top position in Group A. In the final game on Tuesday (6 p.m.), the U21s face Romania, while Hungary is waiting for the Netherlands.

For years, Germany has lacked a center forward of international stature. What Lukas Nmecha showed against the Dutch gives hope that a top nine is finally in the making. The man from Manchester City (loaned to RSC Anderlecht) claimed numerous challenging balls against the robust Dutch defenders and distributed them cleanly.

On top of that, the 22-year-old kept looking for a way down, but his backers Özcan and Berisha found Nmecha too seldom. In the end, the native of Hamburg was able to reward himself by stepping in as a late equalizer – and thus giving his team an excellent starting position.

0: 1 Kluivert (47.): Riesen-Bock from Keeper Dahmen: The Mainz player gets under pressure with a throw-in back pass because of a bad ball acceptance, wants to clear the ball, does not hit the game device fully and so hangs up for Kluivert, who hits the empty goal.

1: 1 Completion (84.): The best German scores to equalize: Burkardt, who has just been substituted, pulls past his opponent on the right, brings the ball flat into the middle where Nmecha is just right and pushes in.

The notes for Germany 20 years of “Gothic”: Steam version of the role-playing game gets...

Berlin & Brandenburg: Fatal accident with a police car: collision with...

Corona live: Brits are disappearing from quarantine in Switzerland