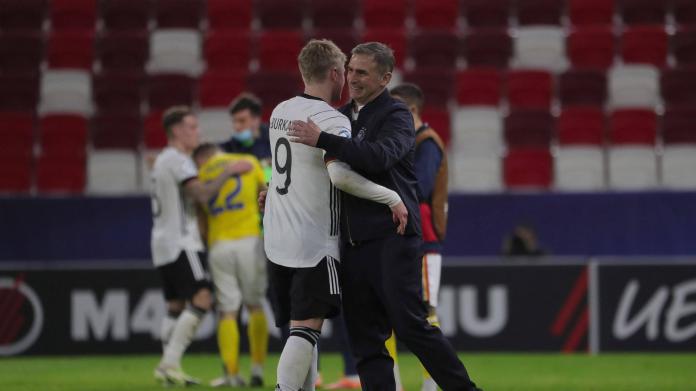 A draw against the Romanians would have been enough for the German team of coach Stefan Kuntz to reach the quarter-finals on May 31st – but Germany had to survive tricky opening minutes against Adrian Mutu’s team.

In the third minute Marco Dulca brought the ball on the German goal for the first time after an Olaru corner, but the attempt was intercepted before the post. Only 120 seconds later it got even more dangerous when a half-high flick from Alexandru Matan landed on the right post (5th).

The aluminum bludger woke up the German team, who from then on worked their way into the game, took control from the tenth minute on and were able to record ball possession shares of 70%. In the 20th minute of the game Germany was dangerous for the first time after a corner from David Raum, but Lukas Nmecha was unable to bring Nico Schlotterbeck’s header extension on goal from a difficult angle.

Werner has the blues: “It’s frustrating to watch him”

Four minutes after this scene, Mergim Berisha stuck into Mateo Klimowicz’s run at the perfect moment, who in turn appeared alone in front of Andrei Vlad and outwitted the keeper with a lob. However, the ball was scraped off the line by Alexandru Pascanu in the last second (24th).

After further half-chances by Ridle Baku (31st), who did not get a header, as well as a harmless right-footed shot by Nmecha from almost 13 meters, Berisha could have put the Germans in the lead after a fine move over Josha Vagnoman and Baku. However, a Romanian was there and blocked the RB Salzburg player’s shot from ten meters to the corner. So it went into the break with a flattering 0-0 for Romania.

The Romanians were owed in round two – due to the leadership of the Netherlands in the parallel game against Hungary – and came out of the cabin with steam. The Germans tried to maintain calm and control – but this only succeeded to a limited extent.

After Amos Pieper brought down Darius Olaru on the edge of the box in the 64th minute, Romania had a chance to take the lead in the person of free-kick artist Andrei Ciobanu, but the attempt was too weak and unplaced and was therefore no problem for Finn Dahmen.

Five minutes later, the DFB-Elf got on the other side – after Denis Ciobotariu fouled Berisha – a free kick in a similar position. The fouled stepped himself and shot the play equipment into the wall, where Adrian Petre got the ball – penalty! Nmecha stepped up and put the leather on the right post (72nd).

Germany still had to worry about making it to the quarter-finals – also because substitute Jonathan Burkardt failed three minutes later with a half-high flick to Vlad (75th).

In the final phase, the German team, which looked flat, had to survive some dicey situations, but did so and kept a clean slate. Pieper missed the late winning goal with a header shortly before the end of regular time. His attempt landed on the crossbar from five meters – it stayed 0-0. That was enough for Stefan Kuntz and his men to advance as second in the group behind the Netherlands. Romania, on the other hand, is eliminated from the tournament.

Niklas Dorsch (Germany U21): “It was a very difficult path. We created a lot of chances, but didn’t make the goal – so we had to tremble in the end. The Romanians showed their quality. Defensively, we did very well and didn’t allow much, except for the chances in (…) We missed a penalty and hit the crossbar – today it all came together. We saved the goals for the quarter-finals. (…) After the missed penalty, I knew we had to knock everything in. We did then also done. ”

Stefan Kuntz (Coach Germany U21): “The whole tournament has so far been more exhausting than expected – both for the coaching staff and for the players. In the ten days that we are here together, a wonderful management crew has emerged, which also regulates a lot within the team. (…) The players followed me with my tactic of not playing arithmetic games but going on goal. We created more chances than in the last few games, but we often didn’t play it off properly. Perhaps something was lacking concentration, a lot of the boys are up gone to the gums. (…) After the final whistle, I congratulated the boys on having given them the chance to prove themselves at this level in the final tournament at the end of May. “

Lukas Nmecha missed with his missed penalty in the 72nd minute the preliminary decision in favor of the German team, who had to tremble until the final whistle for a place in the quarter-finals.

That caught the eye: mature performance of the DFB-Elf

Germany played the best half of the tournament in the first 45 minutes. Pieper and Schlotterbeck opened rooms again and again with precise diagnostic balls, Dorsch and Maier managed the game confidently from the midfield center. The German U21s offered a very adult performance with a good floor plan and appropriate positional and passing play.

In the second half, Germany slacked off somewhat, which was also due to the obviously dwindling forces. Nevertheless, the DFB-Elf held up well, hit the aluminum twice themselves.

In an intense and physically-guided game, the Spanish referee Guillermo Cuadra Fernandez had to pull out nine yellow cards.

You might also be interested in: BVB star Meunier is critical: “Half of the team is currently only average”

Will Reus make it to the EM? That says national coach Löw

Gündogan on Löw’s successor: “I would take Guardiola immediately”

Will Reus make it to the EM? That says national coach Löw

Bloody clan dispute in Berlin! Explosive: The victim is the...

Kyla wears earrings: Another shit storm for the Harrisons?

The most beautiful midlife crisis film of the year? –...

The Czech Republic asks for help in the treatment of Covid...