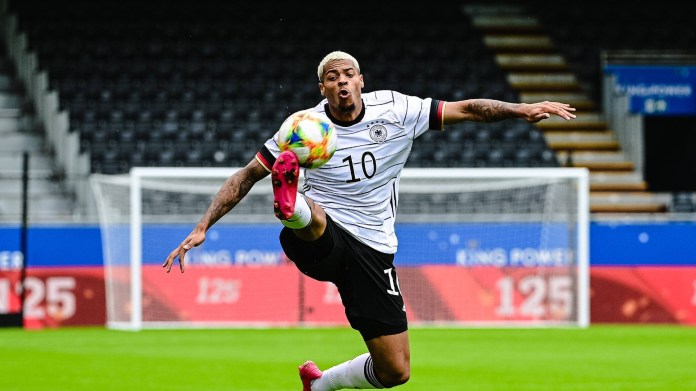 The German U21 national team will play against hosts Hungary at the EM. Goal accompanies the kick-off tonight in LIVE-TICKER.

Showtime for the young German team at the U21 EM in Slovenia and Hungary: Today at 9 p.m. in Szekesfehervar against the Hungarian national team, i.e. the hosts.

You can either follow the U21 live on TV and LIVE-STREAM or watch the LIVE-TICKER for free. Goal accompanies the full 90 minutes today in detail.

before the start | In September 2017, both U21 teams played against each other – with the surprising winner Hungary. Back then, the Magyars won 2-1 in the Paderborn Benteler Arena. Johannes Eggestein from Bremen met for the German junior staff.

before the start | The coach of the Hungarian U21s is Zoltan Gera, 97 times Hungarian national player and best known for his time in England. The former central midfielder played over 200 competitive games for West Bromwich Albion and Fulham FC.

before the start | With Hungary, Germany will meet “a stranger” at the start of the tournament, according to Kuntz. Unknown especially because with captain Patrik Demjen as well as Szabolcs Schön, Zsombor Nagy and Zoltan Szilagyi, the even more well-known professionals are no longer in the squad. The four service providers tested positive for Corona shortly before the end of the reporting period.

before the start | Because all the professionals were still in action with their clubs last weekend, the U21 team had to start the tournament practically without any preparation. “We have to try to break everything that normally takes place in ten days into two days,” explains coach Stefan Kuntz.

before the start | An overview of the special mode of this U21 European Championship: The tournament will be held in Hungary and Slovenia, divided into two periods. The group phase takes place during this international break (until March 31), the knockout rounds with the first and second group players between the season finale of the national leagues and the start of the European Championship (May 31 to June 6).

before the start | Start of the U21 European Championship: On the very first day of the tournament, the German national team intervenes in the tournament and meets host Hungary. The game is played in the MOL Arena Sosto in Szekesfehervar, a small town southwest of Budapest.

before the start | Welcome to the U21 European Championship and the duel between Hungary and Germany.

Hungary U21 vs. Germany U21 today in LIVE-TICKER: The line-up

Finn Dahmen from FSV Mainz 05 is in the goal of the German U21 national team at the European Championship opener against Hungary. DFB coach Stefan Kuntz, who had left the goalkeeper question open until the end, gave Dahmen the preference over Lennart Grill (Bayer Leverkusen) and Markus Schubert from Eintracht Frankfurt.

Dahmen has only played one Bundesliga game for Mainz this season.

Hungary U21 vs. Germany U21 today in LIVE-TICKER: The squad of the German team

🇪🇺 OUR MANAGEMENT FOR THE GROUP PHASE # U21EURO! 💪💥

You can see all of our games LIVE @ProSieben 📺# U21 HEART SHOW # ranu21em pic.twitter.com/7KSQkSvOsD

We took a close look at the squad and examined all the players.

U21 EM today live on TV and LIVE-STREAM? All information about the broadcast of Hungary vs. Germany

The 2021 European Championship for the U21 national teams starts today. In a separate article on our website you can find out where the duel between Hungary and Germany is running live on TV and LIVE-STREAM today.

U21 EM live: Hungary vs. Germany in LIVE-TICKER – the preliminary report on the game

For the German U21s around Stefan Kuntz and teenager Youssoufa Moukoko, a “special” EM starts on Wednesday. Only one win counts at the start against hosts Hungary.

Cologne / Szekesfehervar (SID) Youssoufa Moukoko laughed and danced around the slalom poles, while Stefan Kuntz watched with satisfaction: Before the “by far the most unusual start of an EM”, the German U21s were in a good mood despite all the Corona obstacles. “We used the slogan ‘Special times, special team'”, said DFB coach Kuntz after the first, fun training session in Hungary: “Now we have to fill this sentence with life.”

The circumstances are indeed special. Just two days after arrival, things will get serious for the DFB team on Wednesday against hosts Hungary (9 p.m. / ProSieben). A single team training session had to be enough before the first kick-off. “Then we’ll just play a group game without any preparation,” said Kuntz in the German team hotel on the shores of Lake Velence.

Nevertheless, only one win counts against the blatant outsider Hungary in Szekesfehervar, Kuntz knows that too. The top game against the Netherlands will follow on Saturday, when the 58-year-old sees his team in the role of outsiders. A look at the market values ​​of all EM players is sufficient proof. “As the most valuable German, Ridle Baku is 31st,” said Kuntz: “And after that no one comes for a long time.”

But: Baku from Wolfsburg (17.0 million euros) is followed by an extremely melodious, hope-giving name with a value of ten million – Youssoufa Moukoko. The 16-year-old from Borussia Dortmund is in the squad for the first time and could become the youngest player in German U21 history against Hungary.

Nevertheless, Kuntz warned against having too high expectations of the teenager. “The fact that Youssoufa was playing in the Bundesliga at the age of 16 speaks for his extraordinary talent. But we work a lot with these talents and we have seen a lot of talent fail,” said Kuntz. Moukoko’s integration into the team has worked well so far. “When I look at him like that while he’s eating, I think we don’t have to worry,” said Kuntz.

However, it is quite possible that Moukoko will have to sit on the bench first. In general, the selection of the first team is not that easy, as not all players in their clubs have regular seats.

On the one hand, he wanted to see “who is currently running,” said Kuntz, but at the same time he wanted to “hold the line to those actors who did a lot for us”.

In addition to captain Arne Maier from Arminia Bielefeld, the regular tribe includes the Belgian legionnaires Lukas Nmecha (RSC Anderlecht) and Niklas Dorsch (KAA Gent), but also Salih Özcan from 1. FC Köln, Amos Pieper (Bielefeld) and Nico Schlotterbeck ( Union Berlin). Pieper emphasized in Hungary that he was “even more excited” about the European Championship “precisely because of” the difficult circumstances.

The goal remains first or second in the group to reach the quarter-finals at the end of May. And until then, the team has to deal with the special circumstances such as eating at individual tables in the 300 square meter dining room.

“We really have to deal with a lot of new things here,” said Kuntz: “But it would have done a little less too.”

U21 EM live: Hungary vs. Germany today in LIVE-TICKER – the duel at a glance

Moderna wants to deliver vaccine to the EU as early as...