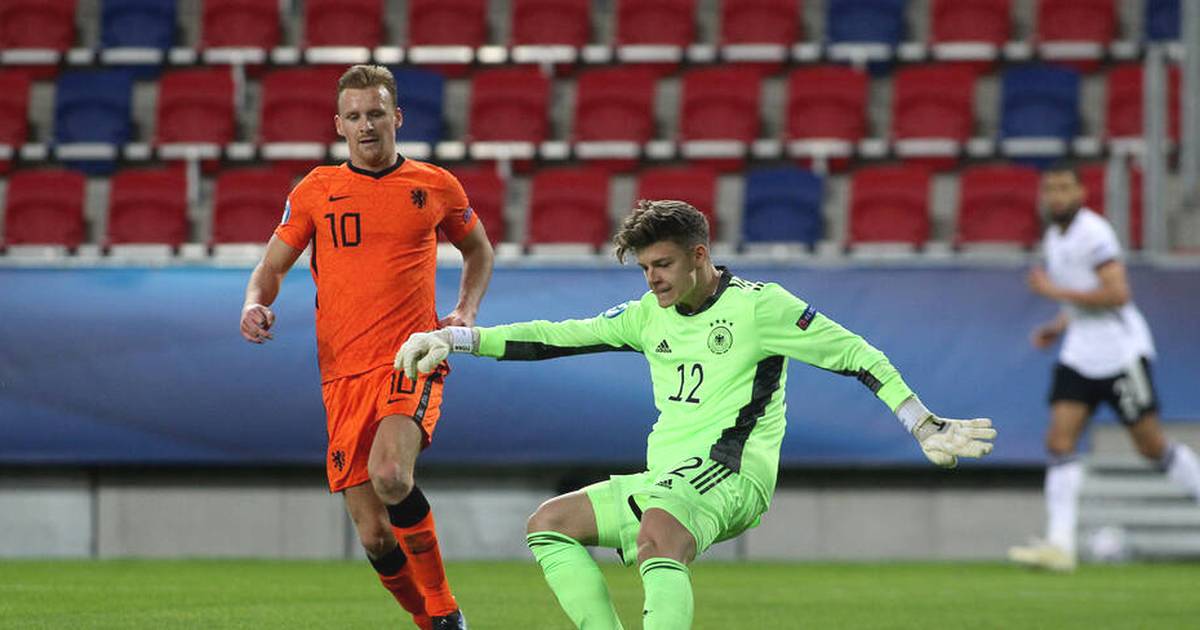 The German U21s did not let themselves be unsettled by a mega-mistake at the European Championship in Hungary and fought their way to a 1: 1 (0: 0) in the classic against the Netherlands.

The prestige duel in Szekesfehervar found its biggest upset by a blackout by Germany’s keeper Finn Dahmen. (The game for reading in the ticker)

After a throw-in from Josha Vagnoman, the goalkeeper of Mainz 05 hit the ball on his 23rd birthday when trying to clear the ball and Leipzig’s Justin Kluivert only had to push into the empty goal (47th).

But in the closing stages Lucas Nmecha equalized after a solo by substitute Jonathan Burkardt (84th).

Now Germany is still leader in Group A. The Netherlands had already had their backs to the wall after the 1-1 draw against Romania. Now the young Elftal is threatened with death.

After Romania beat Hungary 2-1, everything is still open, and the DFB youngsters can still be eliminated despite four points. (The tables of the U21 European Championship)

So Germany has a final against Romania and needs at least one draw.

After the convincing 3-0 win against Hungary at the start, national coach Stefan Kuntz changed his starting line-up to two positions. Ismail Jakobs and Salih Özcan started for Jonathan Burkardt and David Raum.

That had several consequences. First off, Kuntz changed formation and started on a 3-5-2 system. (Schedule and results of the U21 European Championship)

In addition, the coach made an explosive reunion with his changes.

On October 12, 2018, during the test of the German U20s against the Netherlands in Meppen (1: 1) after the final whistle, a pack was formed when the Dutchman Jordan Teze spat in the face of German captain Salih Özcan “out of nowhere” (Özcan).

So it was made explosive and got down to business. Orange striker Noa Lang had to leave the field after 22 minutes after several tough duels.

For a long time there was no room for football highlights in view of the explosive situation.

In the new system, Germany lacked the urge to move forward. The result: Amos Pieper’s harmless header (29th) and Özcan’s central shot from an acute angle (40th) were the offensive highlights.

Instead, Oranje pushed for the lead.

Dani de Wit missed his header from the post by just centimeters (36th). Keeper Finn Dahmen just watched the ball and was already beaten. (The squad of the German U21s)

A little later, the goalkeeper saw Leipzig’s Justin Kluivert running towards him. The striker lifted the ball next to the goal (38th).

Germany held back and only came into play better after the mega-mistake by Dahmen and the 0-1 by Kluivert.

Arne Maier with a free kick (55th) and Lucas Nmecha with his shot to the side netting (67th) created opportunities.

Suddenly the Kuntz-Elf set the tone and returned to the traditional 4-2-3-1 system while the Netherlands withdrew.

A little later, however, Nmecha met and initiated a final offensive.

Court decision in London – Wikileaks founder Julian Assange should not...

How do you influence the number of corona cases?

Lockdown will be extended until January 24th

Corona numbers: Passau is replacing Hildburghausen as a hotspot