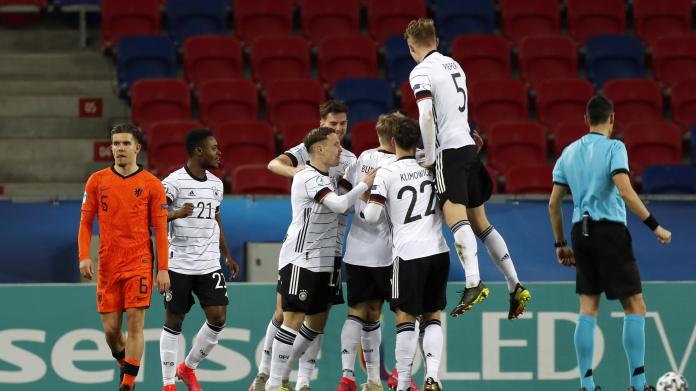 The Dutch acted briskly at the beginning. Germany was initially mainly occupied with working against the ball and left hardly any gaps defensively. There were some foul games, which made the game slow. There was seldom a goal danger in the first round on both sides. Jong Oranje had a good chance of scoring the opening goal in the 36th minute, but failed because of the aluminum. Arne Maier did not get access to Cody Gakpo, who crossed from standing up to the second post near the left sixteen corner. There Dani de Wit nodded at the left post from a short distance away.

Four minutes later, Mergim Berisha shot from a half-right position from inside the penalty area, but could not beat goalkeeper Kjell Scherpen. It was the first – and remained the only – shot of the DFB team at the target in the first half.

It was only two minutes after the break before Elftal benefited from a gross blunder by Finn Dahmens and took a 1-0 lead. HSV player Josha Vagnoman threw the ball from the right side into the penalty area to Dahmen. The keeper initially lifted it to his chest with his left hand and then tried to shoot out of the danger zone, but did not hit the play equipment well. Justin Kluivert grabbed it and pushed it into the empty gate.

Only in the final phase did Germany reward itself for a strong performance of will with the goal to make the final score 1: 1. Jonathan Burkardt, who had only been substituted two minutes earlier, beat Sven Botman on the right at high speed and gave flat to the five-man edge. There Anderlecht striker Lukas Nmecha shoved in from a central position (84th) and saved the DFB-Elf an important point.

Another match in the final group game against Romania would be enough for Stefan Kuntz’s team to move into the knockout phase.

Stefan Kuntz (Germany coach): “It was a very emotional game, a high-level competition in this age group. I am extremely proud of the way the team countered it. We didn’t give up until the end – that’s really fantastic. It was a well-deserved draw at the end. ”

Lukas Nmecha (Germany): “Johnny Burkardt did a great job. I was in the right place – and then it wasn’t difficult anymore. That was a very important point. Now we’re going into the next game and we want to score points.”

Nico Schlotterbeck (Germany): “It was a very unfortunate day for Finn Dahmen. We scored the goal for him. We showed good morale and the point is very satisfactory.”

Noa Lang was replaced due to an injury in the 22nd minute. The player on loan from Ajax Amsterdam to Club Bruges walked off the pitch after suffering a pain in his left knee. The frustration about it was clear to see. Get well soon!

That fell on: See you again after a spit attack

Jordan Teze and Salih Özcan faced each other on the lawn for the first time since October 2018. At that time, in the U20, the game ended 1: 1, after which Teze spat on DFB captain Özcan. It was not the first spitting attack in an international match between these two nations. In the second round of the 1990 World Cup, Frank Rijkaard spat in the curly hair of the then German national striker Rudi Völler. It was noted that Özcan was particularly motivated to see Teze again. It was quiet between the two players, but Teze clashed with Ismail Jakobs in the 51st minute, which was followed by a pack formation.

There were four current Bundesliga soccer players in the Dutch matchday squad. Namely Ludovit Reis (VfL Osnabrück), Deyovaisio Zeefuik, Javairô Dilrosun (both Hertha BSC) and Kluivert (RB Leipzig). However, only the latter was found in the starting line-up.

You might also be interested in: With two Bayern stars to the world title? This is the US master plan

“We don’t have time”: U21 starts a difficult EM mission

Moukoko at Olympia? Kuntz dampens hope: “would be counterproductive”

Schalke cannot win with the new coach either

Werder Bremen: Manager Baumann wants to loan these players out!