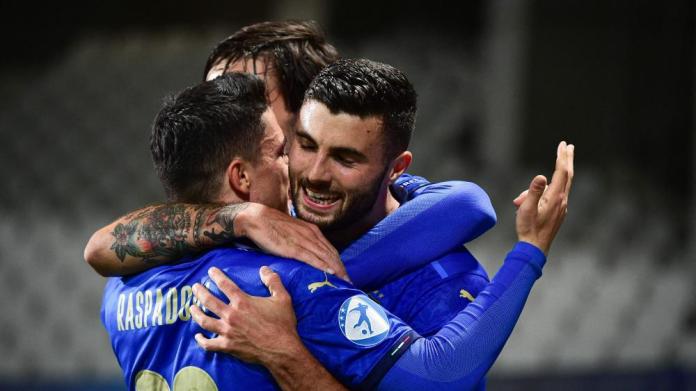 The Azzurri are in the quarter-finals. © APA / afp / JURE MAKOVEC

Germany and Italy have made it to the quarter-finals of the U21 European Championship.

Totally relieved, Stefan Kuntz called his German U21s together after the trembling game in the quarter-finals in a circle. A few words from the coach were followed by the cheers of the young national players, who qualified for the knockout round of a European football championship for the fourth time in a row by beating Romania 0-0 at the preliminary round. However, the group won the group, with Germany in second place, Romania in third and Hungary in fourth.

The two U21 European Championship record winners Italy and Spain are also in the quarter-finals. The Azzurri won 4-0 against Slovenia in the evening, defending champion and co-favorite Spain beat the Czech Republic 2-0 in Group B. Giulio Maggiore (10th minute), Giacomo Raspadori (19th) and double goal scorer Patrick Cutrone (25th / foul penalty / 50th) scored for the Italians; Match winner Dani Gomez scored both goals for the Spaniards (69th / 78th). Group winner was Spain (7 points) ahead of Italy (5), the Czech Republic (2) and Slovenia (1).

AGRANA’s bioethanol and sugar business is better than last year |...

Corona vaccine from Biontech and Pfizer receives US emergency approval

“Golden CD”! SO made Karl Jeroboan speechless the jury around...

Did you know? Sarah Harrison originally learned this job