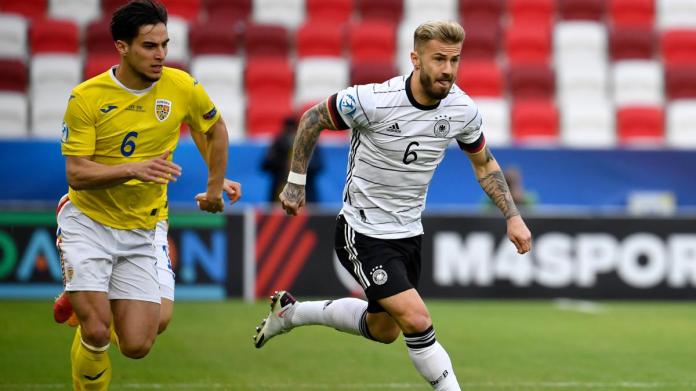 At the beginning, the German selection had to survive an urgent phase of the Romanians, Matan hit the post (5th). After that, the DFB team clearly won the upper hand. Klimowicz had the best chance, but failed with a lob in front of the goal.
It continues below the ad

In the second round a two-way fighting game developed before Germany turned it up again. Nmechas only hit the post with a hand penalty (71st), a little later Burkardt’s attempt on the line was cleared (76th) and Pieper ultimately failed on the crossbar (89th).

In the end, Stefan Kuntz’s team had to tremble again, but managed to make it 0-0. In the parallel game, the Netherlands defeated hosts Hungary 5-1, making it the group winners in the quarter-finals. The knockout round starts at the end of May.

Dorsch between genius and madness

Busy in a duel, safe on the ball and blessed with a great overview, the six directed the German game. The question arises as to why the 23-year-old Dorsch “only” plays in Belgium at KAA Gent. Dorsch provides the answer with the same: too often he fails to complete good actions. Inexplicable feeds mix with the many good ideas. Nevertheless: Dorsch was the best German against Romania.

The scores for the German U21 This is what Christian Drosten says about the Astrazeneca debate

Labor market in Upper Austria: export secures many jobs even in...

Stefan Effenberg calls for EM in Germany – in just one... Brexit: The tone is getting rougher

ECHR judgment expected: How Kunduz continues to have an impact today

Corona hairstyles: cutting yourself is trendy