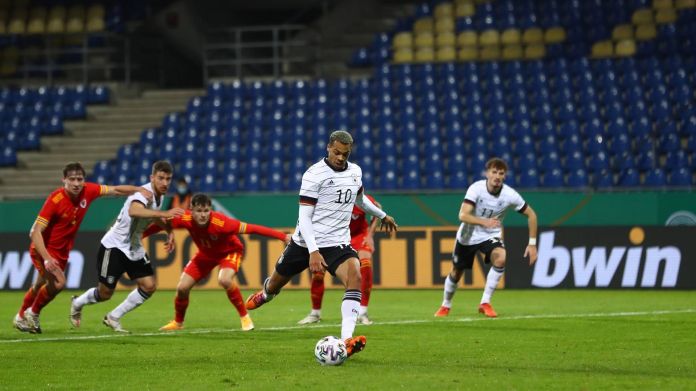 In the international classic, the DFB’s U21 team meet the Netherlands – we’ll show you how and where you can watch the game.

While the senior national team begins qualifying for the World Cup in Qatar, the DFB’s oldest junior team, the U21 selection, in the European Championship in Hungary and Slovenia.

In the preliminary round, the boys from coach Stefan Kuntz get with them Romania, the Netherlands and hosts Hungary to do. The DFB team must leave at least two of these teams behind in order to advance to the final round. Probably the strongest competitor: The U21 team from neighboring Netherlands. At the second matchday of the U21 European Championship group stage it comes to direct encounter between Germany and “Oranje” – A real international classic not only at the senior national team level.

For Germany, Dortmund’s youngster Yousouffa Moukoko, Wolfsburg’s Ridle Baku and Lucas Nmecha from the Belgian record champions RSC Anderlecht will appear at the EM, and the Netherlands are also sending some players with Justin Kluivert from RB Leipzig and Sven Botman, regulars for the French top team OSC Lille Races that play important roles in their clubs despite their young age. By the way: At the last European Championship, the German U21 team finished second, and in 2017 they were even crowned European champions.

kicking off the game taking place in the Hungarian Szekesfehervar is on Saturday evening (March 27th) at 9 p.m..

At the U21 European Championship there will be a duel between Germany and the Netherlands. We’ll tell you where the game can be seen. In addition, you can read the lineups of both teams here shortly before the start of the game.

U21 European Championship: The game Germany vs. Netherlands at a glance

Germany vs. Netherlands – watch the U21 European Championship live

The good news for all football fans and hobby scouts: All games in the U21 European Championship will be in Germany broadcast live and in full length. Here you can find out where and how.

🏆 🇭🇺 🇸🇮 The # U21EURO starts today! Take a look at the host cities in Hungary and Slovenia and then click the link in the video to see the key details about the competition. pic.twitter.com/tsQvTyEb9S

And it gets even better: The classic between Germany and the Netherlands is in free-to-air television to see! Like all other games with German participation, the game against the neighbor is on live and exclusively on Prosieben.

From 8:15 p.m., the private broadcaster goes on air with preliminary reports and background information on all aspects of the game, and from 9:00 p.m. on time, commentator Matthias Stach takes over and reports on the game in Szekesfehervar. The special highlight: his son, Anton Stach, will also appear on the field for the German junior national team.

While also the remaining German games on the main station Prosieben are shown takes over Prosieben Maxx the transfer of all other games.

U21 European Championship: The broadcast at Prosieben at a glance

Follow Germany vs. Netherlands online and in LIVE STREAM

The meeting between Germany and the Netherlands can also be seen online: ran.de streams the game live, as well as all other EM games.

U21 European Championship: Don’t miss a thing in Germany vs. Netherlands with the LIVE-TICKER from Goal

You can’t see the game live in front of the screen, but you still don’t want to miss anything? Don’t worry with that LIVE-TICKER You always stay up to date with Goal. Goal also provides you with statistics and background information about the game.

Germany vs. Netherlands: The lineups – that’s how the coaches play

As soon as they are officially announced, we will present you the starting formations of both teams here.

Seven Austrian universities in the top 50