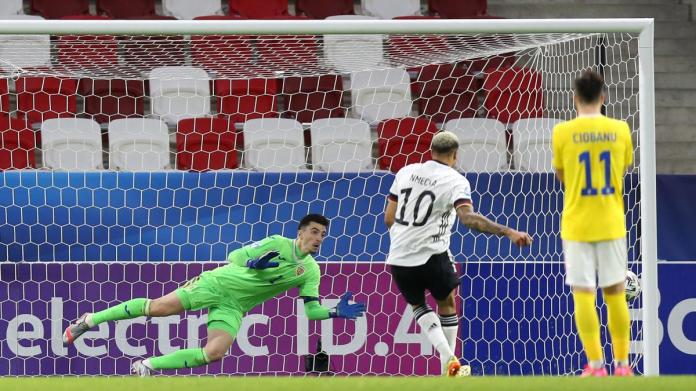 With a draw against Romania, Germany qualified for the quarter-finals in the last group game of the U21 European Championship in Hungary. Striker Lukas Nmecha missed the greatest chance of victory from the penalty spot.

DGermany’s U21 footballers trembled in the group final against Romania in the EM quarter-finals. A 0-0 at the end of the preliminary round was enough for the selection of the German Football Association on Tuesday in Budapest for the fourth entry into the knockout phase of a European championship in a row.

Striker Lukas Nmecha failed with a hand penalty on the inside post (72nd) and thus missed the great chance of victory. Amos Pieper hit the crossbar shortly before the end (90th). Opponents at the start of the knockout phase on May 31st are Denmark, France or Russia.

“That was extremely difficult. We don’t score and we have to tremble in the end, ”said midfielder Niklas Dorsch at ProSieben. “We created very good chances, but unfortunately we didn’t score.” But he didn’t care after the happy ending. “Penalty, latte – everything went well. It was very unfortunate, but we’re going to take it on for the quarter-finals, ”said Dorsch. “We definitely have to celebrate.”

After a research start in Romania, the team from coach Stefan Kuntz took control and dominated the first half. After the break, Romania became temporarily stronger in the heated game, but the DFB-Elf still had better chances. Despite being equal on points, Romania was eliminated because of the poorer goal difference compared to the Netherlands and Germany.

Kuntz had adjusted his team to an opponent with an “extreme mentality” and was right. The team of coach Adrian Mutu approached the game aggressively and passionately and worked out the first big chance. Alexandru Matan’s flick hit the post (5th). The Romanians played energetically and powerfully.

Germany tried hard to hold back and to get into the game through the duels. And this was successful, the DFB selection took more and more control. The best chance for an early lead had the debutant Mateo Klimowicz (24th). The 20-year-old, who got a few words from Kuntz right before kick-off, was free after a fine pass from Berisha and opted for a lob, which could be cleared before the goal line.

Moukoko had to postpone his debut again

DFB goalkeeper Finn Dahmen, who was back in the starting line-up after his bad mistake against the Netherlands, was initially unemployed after the Romanian offensive. Defensively, the German team hardly allowed anything, offensively, they combined handsomely. But without Youssoufa Moukoko, who was missing again, she missed the goal danger somewhat. The 16-year-old BVB exceptional talent had to postpone his debut again injured.

Romania held against it with struggle and toughness, but the German team came closer and closer to the opening goal with loud cheers from the substitute players. Mergim Berisha’s shot was blocked (42 ‘). After the break, things continued to be very competitive and the tension increased.

The game was now more balanced, but also heated – the referee distributed several yellow cards in a short time. Midfielder Niklas Dorsch also received his second yellow card in the tournament and thus missed the quarter-finals. The greatest chance to make everything clear for Germany was then given by Nmecha vom Punkt. So the German team had to worry about progressing to the end, but brought the 0-0 over time.