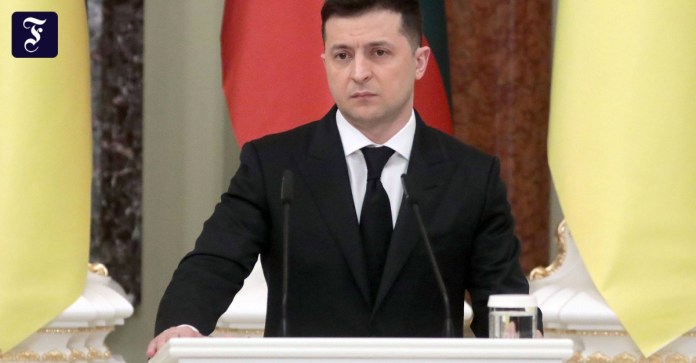 The two lawyers represented “a threat to state independence and national security,” according to a presidential decree. A preliminary investigation is already underway against a judge.

IIn Ukraine, the dispute between President Volodymyr Selenskyj and the Constitutional Court is entering a new round. With a controversial decree, the head of state has reversed the appointment of two judges. The chairman of the court Alexander Tupizki and his colleague Alexander Kasminin “pose a threat to state independence and national security,” said the decree published in Kiev on Saturday.

Both judges were appointed in 2013 by former President Viktor Yanukovych, who was friendly to Russia. In the decree, Zelenskyj refers to a decision of the parliament, in which the reign of Yanukovych from 2010 to 2014 is described as an “unlawful seizure of power”. Yanukovych was overthrown in February 2014 after three months of pro-Western protests. He then fled to neighboring Russia.

At the end of December, Zelenskyj had already given the head of the court a leave of absence. An investigation is underway against Tupizki. Among other things, he is accused of influencing witnesses. According to the media, he is said to have induced a witness to give false testimony. The case is therefore about the privatization of a machine company.

To Zelenskyi’s annoyance, the Constitutional Court had previously collected some of the anti-corruption provisions in the country called for by Western lenders such as the International Monetary Fund. According to the constitution, constitutional judges can only be dismissed after a conviction. Six of the total of 18 judges are appointed by the President. The term of office of the two judges would have expired in 2022.

Thanks to helpers: William and Kate surprise with video