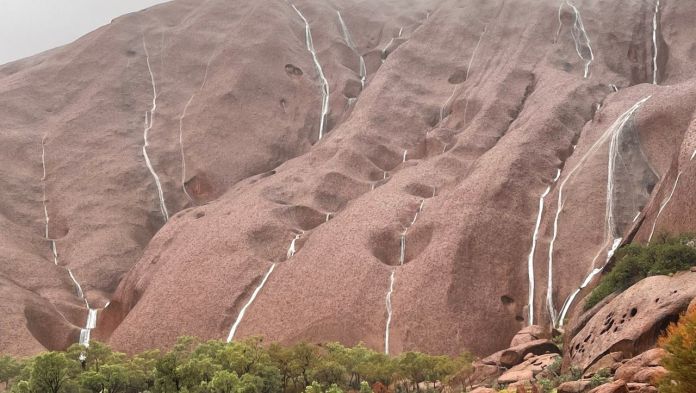 Usually the area around Uluru is extremely dry. The sandstone monolith is located in the middle of the central Australian desert in the Northern Territory. On this Sunday and Monday, however, violent cloudbursts fell over the landmark of the continent. In a few days, the usual amount of rain for the whole month was exceeded five times.
As a result, waterfalls have formed in the numerous gorges and gullies, an impressive spectacle. “I’ve lived and worked around Uluru for four years and have never seen rain and waterfalls like I do today,” Stacey MacGregor told CNN. She works for a company that offers tours around the mountain and has made some remarkable recordings.
The Aboriginal tribe of the Anangu, on whose land Uluru is located, is considered a holy place. As of 2019, climbing Uluru has been officially prohibited. Previously, masses of tourists had taken part in climbing tours every year, despite the protest by the Aborigines. The ban was imposed out of respect for Aboriginal culture, but also to protect the environment and the safety of visitors.
According to the administration of the Australian national parks, more than 395,000 people visited Uluru in the twelve months to June 2019, around 20 percent more than in the previous year. 13 percent of the visitors completed the climbing tour on the rocks.

First death after storms in the east

In the south-east of the country, the flood situation has recently eased a little, with continuous rain stopping after almost a week. However, the authorities do not want to speak of the all-clear yet. “We’re not over the mountain yet,” said Gladys Berejiklian, Prime Minister of New South Wales. Around 24,000 people have had to be brought to safety so far.

The flood disaster also claimed the first fatality on Wednesday: A man was surprised by the floods in his car in the north-west of Sydney and could no longer get out of the vehicle.

China-Austria tandem: “In the footsteps of the panda, the Vienna Boys’...

Looted art under the cross: Colonial debate in the Humboldt Forum

“We have to sell our house”