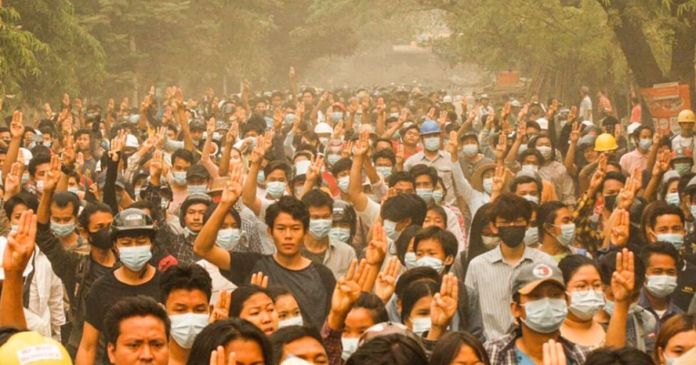 The UN High Commissioner for Human Rights, Michelle Bachelet, and the UN Advisor on Genocide Prevention, Alice Wairimu Nderitu, condemned the events in the strongest terms. Those responsible for the systematic attacks against peaceful demonstrators must be held accountable, they demanded on Sunday.

“Saturday was the bloodiest day since the demonstrations against the coup began,” they said. According to credible reports, seven of the at least 107 dead were minors. Hundreds were injured and arrested. “The international community has a duty to protect the people of Myanmar from such cruel crimes.” If a state fails, the international community must step in. The US Secretary of State Antony Blinken spoke on Twitter of a “reign of terror” by the military.

According to the news portal “Myanmar Now”, 114 people were killed in 44 cities on Saturday. Images are shared on social media that the security forces continue to crack down on resistance in the population. According to media reports, police officers and soldiers are said to have shot at the mourners present at a funeral of a killed student in southern Bago.

In the commercial metropolis of Yangon, the military is said to have shot at residential buildings in districts in which protests repeatedly occur. “People are now afraid to go out and some are injured,” said a 24-year-old resident of the German press agency.

Western countries have strongly condemned the actions of the military in Myanmar. But the military still has supporters in Russia and China, veto powers in the UN Security Council. Diplomatic representatives from eight countries, Russia, China, India, Pakistan, Bangladesh, Vietnam, Laos and Thailand attended a military parade in the capital Naypyidaw on Saturday.

Easy tickets for top clubs: a whole cup round without great...

This Franconian wants to get the jungle crown – Erlangen, Nuremberg

Princess Eugenie became a mother for the first time

DTM shortens calendar: kick-off only in June in Monza / DTM

Mega trial against the ‘Ndrangheta starts in Italy