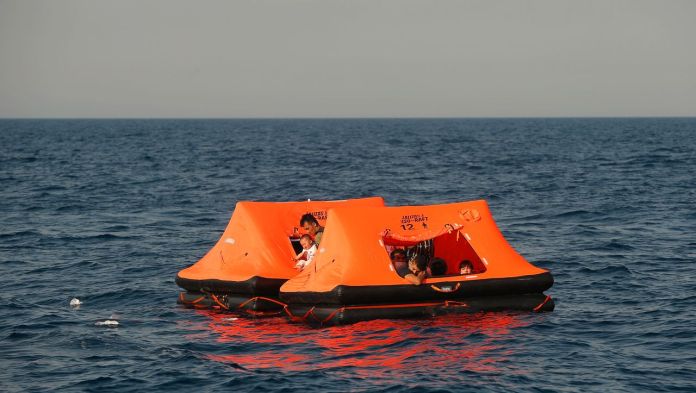 The UN Refugee Agency (UNHCR) is increasing the pressure on the Greek government because of the violations of the law in the Aegean Sea. Since the beginning of last year, “several hundred cases” of alleged pushbacks have been registered, the UNHCR representative in Greece, Mireille Girard, told SPIEGEL.
The UNHCR had given the authorities the relevant information. In all cases, the organization had its own information that indicated illegal pushbacks on land or at sea. “We expect the Greek authorities to investigate these incidents,” said Girard. “The right to asylum is being attacked in Europe.”

Since June 2020, SPIEGEL has shown, in joint research with Report Mainz and Lighthouse Reports, that the Greek coast guard is stopping refugee boats in the Aegean, breaking the inflatable boat engine and pulling people back into Turkish waters. The Greek officials then set the migrants out on the sea on unmaneuverable inflatable boats. Sometimes they also use inflatable orange life rafts. Similar actions take place on the Greek-Turkish border river Evros.

These so-called pushbacks violate international and European law – among other things because those seeking protection are not granted access to an asylum procedure. Greece flatly denies the allegations that the eyewitness reports and geolocated videos are “fake news”.

The European border protection agency Frontex is also involved in the pushbacks, it is carrying out joint operations with the Greek coast guard in the Aegean Sea. In at least seven cases, Frontex units were in the vicinity of pushbacks, in some cases the European border guards even handed the refugees over to the Greeks, who then took over the pushback. A German federal police officer in the Frontex operation refused to work because of this.

The EU anti-fraud authority Olaf, the EU Parliament and the EU ombudswoman are currently investigating the pushbacks. An internal Frontex investigation could not clear up all incidents.

The Greek authorities are even dragging refugees back to sea who have already reached European soil. DER SPIEGEL was able to prove two of these cases without any doubt. In April 2020 a group of asylum seekers arrived on Samos, in November one on Lesbos.

The UNHCR has now also recorded such a case. On February 17, 2021, 13 asylum seekers landed on Lesbos, Girard said. Greek islanders had alerted the UNHCR, the organization then informed the local authorities.

The Greek police led the refugees to a container in a quarantine camp in the north of the island. Then masked men came, drove the migrants, including women and children, to the port and left the people in an inflatable life raft without propulsion on the sea. They were later rescued by the Turkish Coast Guard.
The UNHCR reconstructed the case in detail and interviewed witnesses and the survivors. There is no doubt that the people arrived on Lesbos and were illegally returned to Turkey, says Girard. Such actions are illegal. “The incident must be investigated and consequences.”
The sometimes violent actions meant that refugees often hid from the authorities, Girard continued. “The asylum seekers are already traumatized, if they are violated again in Europe, it retraumatizes them,” says Girard. “Children in particular have to struggle with it for years.”

How dangerous is fake news?

Virtual New Years Run – Run into the new year for...

We – the good person of Berlin